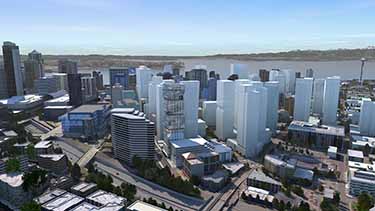 The Burrard Group of Vancouver, B.C., is offering more details about at its plans for a 40-story condo tower it wants to build at 1200 Howell St. in the Denny Triangle.

The developer said yesterday it expects to break ground by the end of the year and begin occupancy in 2019.

The tower, called Nexus, would have up to 403 units ranging from one to three bedrooms.

Burrard Group filed for a master use permit in March.

The developer will start taking condo reservations in May, and plans to begin presales this fall, with prices likely to start in the $300,000s.

Some units would be two-level lofts, and large penthouses are planned. Nexus will also have retail, a co-working space, fitness center, dog run, great room, media facility and an outdoor patio.

The rooftop Sky Club will have social spaces, including an exhibition kitchen, private dining, bar, recreation room, view terrace with an open-air kitchen, and a fireside lounge.

Christian Chan, executive vice president of The Burrard Group, said in a statement that the likely buyers will be empty-nesters, second home buyers and international investors.

“Seattle is a global city on the rise, and values are following the trajectory of more mature gateway cities like Vancouver, San Francisco and New York,” Chan said.

The condos are being marketed by Realogics Sotheby's International Realty.

Dean Jones, president and CEO of RSIR, said in a statement that Nexus will anchor “an emerging vertical village” in the Denny Triangle, where “a meteoric number of developments are creating a glimmering new, multi-billion dollar neighborhood.”

The developer is betting that climbing rents will entice apartment dwellers to take a closer look at buying.