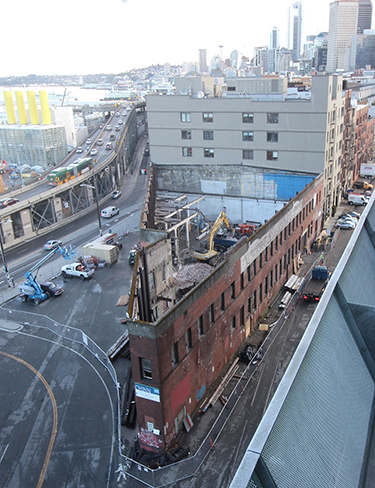 Photo from OxBlue webcam [enlarge]
Seven levels of housing are being added, with floor-to-ceiling windows and high-end finishes. Opening is set for summer 2017.

Chinn Construction has gutted the century-old Seattle Plumbing Co. building next to CenturyLink Field and is starting foundation work to create 107 condos for Daniels Real Estate.

Several truckloads of old timber have been taken out of the four-story building for salvage or reuse. A Daniels spokeswoman said some of the timber will be reused in this building and other projects in town.

Daniels is turning the brick building at 589 Occidental Ave. S. into the Gridiron condos by adding seven levels of housing plus a rooftop deck. The ground floor and mezzanine level will have 9,700 square feet for restaurants and bar spaces.

The building will have floor-to-ceiling windows, high-end finishes, a fitness center, parking and storage space.

Gridiron's website says there will be studios and one- and two-bedroom units. Some will have private decks and balconies.

The complex initially was expected to open in April 2017, but the date has been pushed to the summer of 2017. The spokeswoman said delays in getting city permits are to blame.

The old building was last used in 2001 for storing portable seats for the Kingdome.