A slender, stylish star inspires designers to create a tower with a twist: The Mark

Images courtesy of ZGF [enlarge]
Developer Kevin Daniels said he pushed the team to come up with a building that “would change the way we look at ourselves in Seattle.” 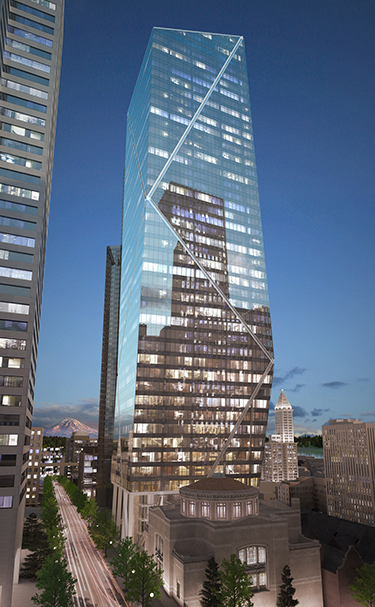 [enlarge]
The Mark expands as it rises and cantilevers over the neighboring church, but a trick of the eye in the design will make it sit gracefully on the narrow lot.

It was almost 10 years ago when Seattle developer Kevin Daniels came to ZGF Architects with a tall order.

For inspiration, the president of Daniels Real Estate looked to Renzo Piano's 2007 New York Times Building, with its double-skinned curtain wall, and to the 1999 sail-shaped Burj Al Arab hotel in Dubai.

But in trying to articulate the qualities he wanted in this structure, Daniels kept coming back to Audrey Hepburn. Inside and out, Daniels said the ideal design would embody the Belgian-born actress's sense of style, sophistication and sexiness.

“What it boiled down to was her image on a piece of paper, and that's what I turned over to ZGF,” he said, referring to the slender, stylish star of “Breakfast at Tiffany's” and “My Fair Lady.”

“In addition to her sophistication,” Daniels said, “it's also what she did later in her life with UNICEF. She had a way of elevating everybody around her.”

So what started with Audrey is now The Mark. It's under construction and set to open in a year, with a design that Daniels said will deliver the chic, gamine silhouette he envisioned.

“The direction from our client was that he needed a distinctive building that upped the ante in Seattle, “ said Allyn Stellmacher, a partner with ZGF. “It will usher in a new era in the way we think of big buildings. It will set the bar a bit higher.”

Wedged into the corner of a city block with two historic structures — the Rainier Club and First United Methodist Church — The Mark is designed to carve a modern profile on the skyline while also satisfying Daniels' “very practical” goals. He wants to maximize the 48 stories with 525,000 square feet of office space above four floors set aside for SLS Hotel Seattle.

Delivering the most square footage possible meant that ZGF would have to balance the need for a sleek design with the engineering challenge of cantilevering The Mark over First United Methodist Church.

“It's a small footprint, but they wanted to maximize the square footage by using the airspace over United Methodist,” said John Worley, a structural engineer and principal with Arup. “One of the things we wanted the building to do was expand as it goes up. We investigated a lot of architectural and structural schemes as we went along, and we went with what proved to be the most elegant solution.”

To avoid having corner columns that obstruct views, as well as interior columns that use valuable square footage, Worley and Arup engineers devised a “megabrace” system to handle the lateral loads of the 660-foot structure.

Structural engineers built an analytical model of the megabrace system, which passed the city's peer review system for a potential 9.0 Richter-scale quake — proving the design could maintain its structural integrity, he said.

“A priority of ours was to keep the weight and the costs down, while making a really nice building,” Worley said. “It's a pretty unique system.”

As the design progressed in 2008, Worley said Daniels went ahead with the plan to order all the steel and lock in the steel prices at that time. When the recession hit and funding dried up in 2008, the project was put on hold.

As the economy recovered, the SLS Hotel committed to being an anchor tenant in 2013 and Worley said only minor design changes to accommodate the hotel's elevators were necessary. The hotel changes, he said, were minor enough that the engineering design did not have to be resubmitted to the city for approval.

Like any building, The Mark required ZGF architects to work closely with structural engineers. “For this building, a big part of the story is the way the engineers worked with the design team to create this dramatic building,” ZGF's Stellmacher said. “We married the development of the form and expression of the building with the structural elements.”

Despite having two turn-of-the-20th-century neighbors, The Mark doesn't try to repeat their design elements.

“At some level, you do a disservice by repeating or mocking them,” Stellmacher said. “Those buildings are distinctive of a time and place, and if the architects of those buildings were alive today they might design a building like The Mark.”

As part of the deal for the redevelopment, the former church sanctuary will be redesigned as a recital hall.

For the SLS Hotel, Daniels said Philippe Starck — who designed SLS hotels in Miami and Los Angeles — will design an “edgy, stylish” hotel that incorporates Northwest design staples such as wood and greenery.

“He does everything according to what he perceives is local,” Daniels said. “With Starck's design of the interior of the hotel, we're also trying to change the way we look at ourselves in Seattle.”

As a developer, Daniels said he's a capitalist at heart who keeps a close eye on the bottom line.

But he has no shortage of opinions about good architecture and bad — saying that nearby Columbia Tower and Seattle Municipal Tower (formerly Key Tower) “do not reflect the ideals and aspirations of the Seattle metro area.”

Rem Koolhaas' Central Library, just down the street, has an “outstanding exterior design,” Daniels said, but the glass is “so gray that the building is not a beacon.”

Daniels said The Mark, with its glass curtain wall, will “aspire to be as great” as Skidmore, Owings & Merrill's 1,776-foot One World Trade Center in New York City.

That ethos is also reflected in other upcoming Seattle buildings such as the 1200 Howell St. condo tower developed by Burrard Group and designed by Weber Thompson.

Blaine Weber, a senior principal with Weber Thompson, called Burrard Group a “visionary client” who asked for a building that would be “transformative, cutting-edge and iconic.” Weber Thompson's design calls for large “stacked cubes” in a 41-story tower.

“Visually speaking, this project is dynamic,” said Weber. “It appears to shift and turn, and it appears to be in motion.”

He said the stacked cube design also is efficient and economically viable.

“The shear core and all columns are all in vertical alignment,” Weber said. “It is actually a very conventional structural frame with no transfer beams or expensive structure — in spite of the exaggerated motion.”

Mark Hinshaw, a Seattle architect who spent 17 years with LMN Architects and is now a principal with Walker Macy, said it takes a daring developer to pursue out-of-the-box designs. Regarding The Mark, “not many people are willing to be as bold” as Daniels and cantilever the building over the church, Hinshaw said.

“So many office towers are chunky and masculine, but The Mark will be streamlined with angular forms,” Hinshaw said.

Hinshaw said The Mark's cantilever does give it a bulge, but the tapering design above the cantilever creates a sort of “trick of the eye” that will make it a “graceful insertion” on a narrow lot.

“It's been a bit like raising a child, which has been a great thing,” he said. “The goal has always been how to actually bring some brightness back to the Emerald City.”