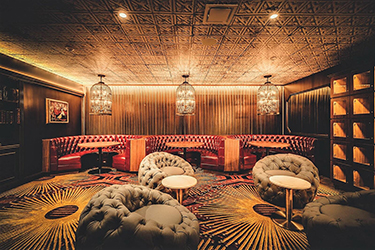 Photos by Arthur Wessel/Hero Creative [enlarge]
Behind a paneled wall you’ll find a Prohibition-style speakeasy, with banquette seats and a copper-topped bar. 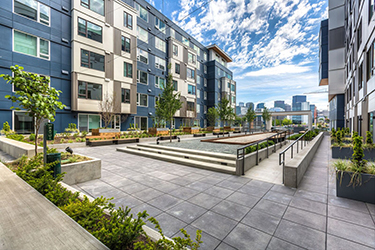 [enlarge]
The new apartment complex Juxt has a large central courtyard with a bocce ball court.

The 361-unit, eight-story complex opened in May in South Lake Union. It has studios and one-, two- and three-bedroom units ranging from 427 to 1,412 square feet.

Runberg Architects is the architect, and Holland Construction Management is the general contractor. Work started in 2014.

With lots of other apartment buildings nearby — either new or under construction — Holland decided it would try to stand out by offering some extras.

Juxt has a large central courtyard with a bocce ball court, and a rooftop terrace with barbecues, lounge seating and an outdoor cinema. At street level is a gaming loft with arcade games, shuffleboard and a “kegerator” for dispensing beer.

But the thing that may get people talking is hidden behind a glossy paneled wall in the eighth-floor Sky Lounge: a speakeasy.

Push past that paneled wall and you'll find yourself in a classic, Prohibition-style speakeasy, with upholstered banquette seating and a copper-topped bar where Juxt residents can hold cocktail parties and other private events.

Exiting the speakeasy requires pulling an iron handle or opening a door marked “janitor's closet,” which actually leads into a hallway.

“It's a hidden room — a classic, timeless little jewel that will never go out of style,” Chell said. “We think the speakeasy will be just as popular in 10 years as it is today.”

Brenda Warner, property manager for Holland Residential, said in a statement that Juxt is leasing about 20 units a week, and that rate “is unheard of.”

“People obviously love the speakeasy, but they also love the rest of the amenities, the great views, the quality of the units, the story of the building, and whole package,” Warner said.

Developers are competing for well-paid renters who work in the tech industry and can afford to live in places with plenty of frills.

Scott Surdyke, a senior project manager for Robin Chell Design, said that other Holland projects have included extras such as a bouldering wall and a rooftop pizza oven. Other developers have installed espresso bars.

“With so much competition you have make your building distinguished,” he said.

For South Lake Union properties, the proximity of Capitol Hill can present another disadvantage.

“South Lake Union doesn't have the nightlife and restaurants that Capitol Hill does,” Surdyke said. “So we have to keep (tenants) engaged and excited about living here.”

That means including the kind of amenities that residents want so they won't have to leave the building.

Chell said one of the challenges with this project was to make a new building feel authentic and have a sense of place.

The effort started with its unusual name, Juxt, which plays on the juxtaposition of technology and innovation in South Lake Union.

Excavating the site unearthed old bottles and objects that are now on display in the lobby. Finding the objects got people thinking about a speakeasy, which also hearkens back to an earlier era.

“So many people move here from other countries,” Chell said. “We wanted to give them an instant sense place, so they would know they were in Seattle.”