The Eleanor opens in Roosevelt with 267 units; 47% already leased 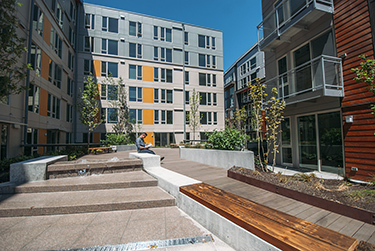 Photos courtesy of Mack Urban [enlarge]
A boardwalk and greenscape separate the two buildings, which have units ranging from studios to three bedrooms.
[enlarge]
Runberg Architecture Group designed The Eleanor.

Los Angeles-based developer Mack Urban just opened The Eleanor, a two-building rental complex at 800 N.E. 67th St. in the Roosevelt area, and almost half the units have been leased.

The seven-story, 267-unit complex broke ground in the summer of 2014. Pre-leasing started in the spring and full leasing began this month.

Mack Urban said in a press release that 47 percent of the units are leased.

The site is two blocks east of the future Roosevelt light rail station on Northeast 65th Street. The station will open in 2021 when the light-rail extension to Northgate is completed.

The Eleanor is also two blocks north of the Green Lake Park & Ride. Though the complex is well situated for transit users, it also contains parking for about 200 cars.

A boardwalk and greenscape separate the two buildings, which have units ranging from studios to three bedrooms. Sizes range from 519 to 1,428 square feet.

Larger units are being marketed toward families, unlike buildings in Amazon-oriented South Lake Union, with storage for strollers and bikes, plus a dedicated dog-washing station.

A fitness center is in one building along with the main lobby/common area, which is a two-story space with a fireplace and reading nooks.

A penthouse atop the west building offers a party space (with kitchen and dining room), two smaller “living room spaces” (with TVs, foosball and pool tables), and a quieter studio area. Games extend to the outdoor terrace, with barbecues, a fireplace and lounge seating.

Mack Urban says the east building's penthouse is intended for “quieter gatherings,” with lounge seating and a fireplace. All public areas have free Wi-Fi.

Amenities inside the units include customizable wall-mounted gear racks. More storage is available near the heavy-duty laundry room; all apartments have individual laundry facilities.

As for green-friendly elements, a rooftop rainwater collection system irrigates the greenery and feeds a stream constructed beneath the boardwalk. The Eleanor has solar panels, sun shades, and high-efficiency plumbing fixtures and appliances.

Under the city's Multifamily Property Tax Exemption program, the Eleanor contains 59 workforce housing units — and all but four of them are leased. The rents are capped at a percentage of median income, with a sliding scale that factors for family and unit size. The tax exemptions sunset after 12 years, as does the income cap.

MFTE units of varying sizes have an average rent of $1,181 compared to the buildings' market-rate average of $1,732, says Mack Urban.

The developer named the apartments for Eleanor Roosevelt (1884-1962), who was a regular visitor to Seattle from the mid-1930s through mid- 1940s as her daughter Anna was married to Seattle Post-Intelligencer publisher John Boettiger.