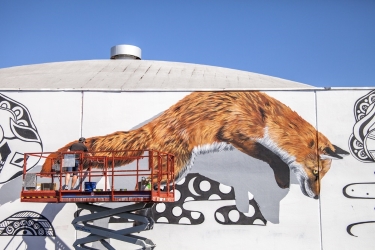 Photo by WISEKNAVE [enlarge]
Artists Ola Volo and David Rice work on their mural along the SODO Track.

About 43,000 people ride on buses and light rail along Fifth Avenue South in Seattle each weekday, greeted by the backs of buildings that have seen better days.

4Culture, the cultural funding agency for King County, wants to change that by having about 50 local, national and international artists paint murals on 32 buildings along the route.

The project is called SODO Track and it will be created over three summers along a two-mile stretch of Fifth between South Royal Brougham Way and South Spokane Street, an area otherwise known as the E3 Busway or Sodo Busway.

Artists from Germany, the Netherlands, Los Angeles, Portland and Seattle are working through Aug. 10 on the first five buildings. A party at 6 p.m. Saturday at Metropolist, 2931 First Ave. S., will kick off the effort. The $20 suggested donation includes two drink tickets.

SODO Track is estimated to cost $300,000, although 4Culture said that figure will likely rise.

4Culture, SODO Business Improvement Area, Urban Artworks and Sound Transit are seeding the pilot phase. 4Culture is seeking a headline sponsor to fund the rest of the project.

“I think that from what I've heard there's a lot of pride in being in Sodo and wanting to develop a positive image for the neighborhood and support for public art,” she said.

4Culture hired Gage Hamilton, an artist and public arts organizer who was responsible for a Portland mural festival called Forest For The Trees, to plan the project.

He checked out buildings on the Sodo Busway, getting dimensions and looking at surfaces, and helped select artists for the work. He also created the theme: motion, movement and progression.

Hamilton said transit rides can be boring, with people checking their cellphones and keeping to themselves. The mural project is intended to engage people and get them to look up from their phones.

“It is meant to be an imaginary raceway,” he said. “I want it to be something that is inspiring and that improves people's daily commute or daily experience — a point of pride in Seattle. It's a large project. I think it will become a destination.”

Murals tend to be fine and detailed works best done on flat surfaces, Hamilton said. But, he said, some artists are comfortable with other surfaces, such as Low Bros, two brothers from Germany whose work is large, bold and graphic with geometric characters. They are painting a mural on a corrugated metal wall along the Sodo Busway.

Some of the murals will be figurative, some abstract and some poetic, like the 250-foot-long mural by CYRCLE with just these words: “Then out came the sun.”

Another mural by Casey Weldon and Syd Bee shows Mount Rainier at sunset with the sky raining cats — but no dogs. “Stampede,” by Urban Artworks and Josh Keyes, shows animals breaking through a sidewalk in an urban setting that is devoid of human life.

Hamilton said most property owners trusted him to pick the artwork, with the caveat that it not be offensive. Other owners explained what type art they wanted, although he said none of the murals are commissioned.

The BIA wanted the mural project to have a shelf life. Many existing murals on the transit route are old and heavily tagged, Goodman said, and her organization worried the new ones would fall into the same disrepair.

So it worked with 4Culture to guarantee that the owners could remove the murals if they want after seven years, she said. Also, the project includes a maintenance fund, which is important because Seattle requires property owners to paint over graffiti on their buildings, Goodman said.

You can buff out graffiti on a blank wall with a can of paint, she said, but it's more complicated to fix a mural.

The new murals will be eight feet above the ground because most graffiti generally happens below that level — at arm's reach, she said.

Goodman said Sodo was mostly an industrial area when she was growing up here. Now she sees it as a fabulous mix of industrial, retail, manufacturing, commercial kitchens, event spaces and more.

“We're where people come to buy tile and granite, and to have weddings, and most of the food trucks are based in Sodo,” she said.

But few people live in the neighborhood.

“Really Sodo doesn't have residents,” Goodman said. “We don't have that community council, that rallying area. We feel (for) a long time Sodo was ignored.”

The city council in 2013 passed an ordinance that created the BIA, a nonprofit funded by Sodo property and business owners.

It holds networking and issue-based events, and tries to involve the 40,000 people who come to work in Sodo each weekday. The BIA's last meeting was at Emerald City Trapeze Arts.

“We're never going to be University Village and we don't want to be,” Goodman said. “We want to be a place where employees can come and go from work in an area that is safe and clean.”

The mural project helps, she said. “It creates a sense of place, of identity.”