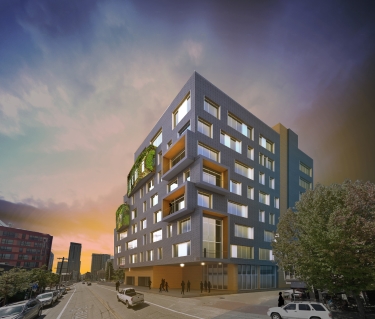 The roughly 10,000 square-foot lot is at 1208 Pine St., near the intersection of Minor Avenue. Melrose Market is across the street to the south.

The seller was Barbara Lui, who acquired the property through family ownership that extends further back than King County's online records, which start in 1993.

The buyer was Pine Esker LLC, associated with James Wong and Brian Heather, the founders of SolTerra. SolTerra has expanded from doing solar and green-roof projects into real estate development. JLL's Matt Kemper was the broker.

SolTerra, which has offices in Portland and Seattle, previously announced plans for a seven-story building on Pine Street called Esker, which will have a green roof and terraces, 72 apartments, 6,000 square feet of ground-level retail, 3,200 square feet of rooftop restaurant space and 35 below-grade parking spots.

SolTerra said it will act as its own designer and builder. Construction will start in 2017 and take about 15 months to complete.

This will be SolTerra's second Capitol Hill project. It is building a 60-unit apartment at 601 E. Pike St. that was previously called Pike, though the name has been changed to Cove. The project started last December and is expected to finish in the first quarter of 2017.