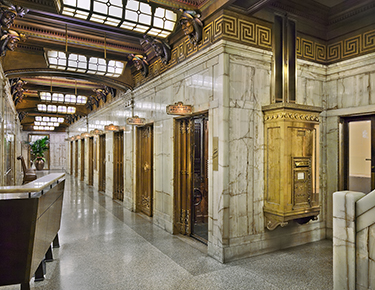 Photo courtesy of Unico [enlarge]
The regular ground-floor tenant entrance remains on Second — and is thankfully unchanged, with its glistening brass-gated Otis elevators. 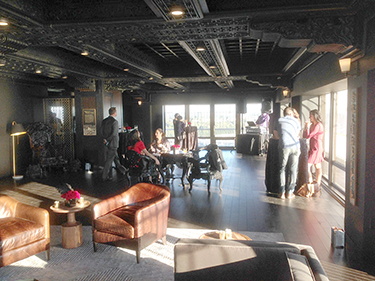 Photo by Brian Miller [enlarge]
The 2,000-square-foot Temperance space has been decluttered and modernized with contemporary furniture and a bar.

The company purchased the tower from CBRE last year for $74 million. During a press tour, Unico reps said they have spent “multi-millions” on the property, resulting in a new bar and cafe called Temperance in the old Chinese Room on floor 35. Views from the outdoor Observatory deck that rings Temperance are familiar but still spectacular.

A new tenant amenity suite on floor 22, with a sun deck, wasn't on the press tour.

At the entry level, on the corner of Second Avenue and Yesler Way, a previously vacant 3,600-square-foot retail space is now Provisions, a gift shop and deli, with soda counter. Northwest brands include Full Tilt Ice Cream.

Visitors who buy a ticket ($14-$19.14) inside Provisions can take a new self-guided tour called “The Legends of Smith Tower,” which winds up through the building and uses the second-floor elevators. The regular ground-floor tenant entrance remains on Second and is thankfully unchanged, with its glistening brass-gated Otis elevators.

Like Temperance, the Legends tour carries a Prohibition-era speakeasy theme. While Smith Tower was completed in 1914, many of historical photos and ephemera on display span a broader period from 1920, when the 18th Amendment was enacted, through 1931, when the 21st Amendment repealed Prohibition.

The Empress Dowager Cixi is still represented by the Wishing Chair in the 2,000-square-foot Temperance space, which has otherwise been decluttered and modernized with contemporary furniture and bar. The original teak-and-tile coffered ceiling and other historic details remain intact.

Unico bills Temperance as “ideal for the party planner or host looking for a cosmopolitan venue that offers unparalleled views of Seattle in bustling Pioneer Square.”

And here's a critical bit of advice to those simply looking for post-work drinks and views: Get there early, since the Observatory and Temperance close at six. (A direct elevator ride costs $10.) The finger-food menu includes local oysters, salmon poke and pork potstickers.