Images by Graphite Design Group [enlarge]
The Lakefront Blocks stretch from Westlake Avenue North to Fairview Avenue North between Mercer and Valley streets. The plan is to develop them in phases. 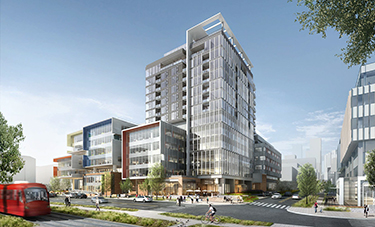 [enlarge]
This 14-story building at 630 Boren would have office space below 95 housing units.

Graphite Design Group will meet with a Seattle design review board next week to show its latest plans for part of Google's proposed campus in South Lake Union.

The design under review is for a 14-story building at 630 Boren Ave. N., between Mercer and Valley streets. The building would occupy the west half of the block.

Vulcan Real Estate is the developer.

Plans call for 145,600 square feet of office space on six stories beneath an eight-story tower with 95 residential units and a rooftop amenity space with an outdoor terrace. About 2,500 square feet of retail and underground parking for 214 vehicles are planned.

The landscape plan includes 8,200 square feet of open space, achieved mostly by setting the building back from Boren Avenue.

The main residential and office entrances would be on Boren. Retail would be on the north end of the site, facing Valley. Vehicle access would be from an alley east of the building.

Graphite updated its designs following the project's last round of board recommendations in July. The changes were to accommodate detail-oriented critiques, such as to emphasize the tower's vertical elements.

The building is part of a proposed three-block development called the Lakefront Blocks that would stretch from Westlake Avenue North to Fairview Avenue North between Mercer and Valley streets, and would be built in phases.

Google will lease 607,000 square feet in four office buildings on the central and eastern blocks, which include the project at 630 Boren Ave. N.

Projects on all three blocks are going through the permitting process.

A city design review board has already approved plans for the site at 609 Fairview Ave. N., immediately to the east of 630 Boren Ave. N. That project will be a six-story, 187,300-square-foot office building.

Here's what's planned for the other two blocks:

• Between Boren and Terry (625 Boren Ave. N.): A 14-story building with office, retail and apartments, including six stories of office and 80 apartments. This is the second Google block.

• Between Terry and Westlake (630 Westlake Ave. N.): A 16-story building with 218 apartment units and one six-story office building with retail and restaurant space

The three-block site, just south of Lake Union Park, is mostly vacant and used for parking.