For $7,000 a month, renters can get a custom penthouse in Kinects 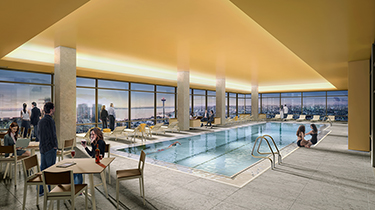 Images by Studio 216 [enlarge]
Kinects will have a swimming pool on the rooftop, as well as a “fire cave” and a “meadow.” 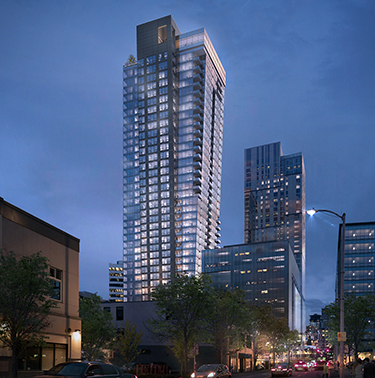 Security Properties has an unusual offer for people who want to live in the 41-story Kinects apartment tower: Rent one of the six penthouses and the developer will customize it just for you.

“The construction team is holding back on starting 39th-floor interior work this fall to accommodate a limited pre-release window for penthouse customization,” said John Marasco, Security Properties' chief development officer, in a statement.

The tower is set to open next summer at 1823 Minor Ave. in Seattle's Denny Triangle.

“We invite future residents to collaborate with a favorite designer, or to team up with one of our own, to imagine a space that is uniquely theirs,” Marasco said.

Security Properties will offer build-out allowances of up to $100,000, depending on the length of the lease.

Each unit will have two bedrooms and two-and-a-half bathrooms, 11-foot ceilings, floor-to-ceiling windows, large balconies and natural-gas cooktops. The largest penthouse will also have a den.

“We're not aware of anyone else allowing this level of personalization in the Seattle apartment market, but we anticipate strong demand based on our research,” Marasco said.

Bumgardner is the architect and Andersen Construction Co. is the general contractor. Cary Kopczynski & Co. is the structural engineer. Windrose is the landscape architect.

Security Properties didn't say when the rest of the units will be available to lease.

One rare feature in Kinects will be an indoor rooftop swimming pool. The tower will also have a concierge, lounge, “fire cave,” “meadow,” demonstration kitchen, theater and game room, according to the developer.

The project includes 4,800 square feet of retail and 315 parking spaces.

People looking at the tower will notice that Kinects grows progressively wider and slopes outward as the building rises. As a result, the eighth floor above the podium is roughly 1,600 square feet smaller than the penthouse level.

Kinects will share the block with another big development slated to open next year: a complex that will include an 11-floor office building called Tilt49 and a 41-story apartment tower called AMLI Arc. Touchstone Corp. is developing the office portion with Principal Real Estate Investors. Mortenson Development and AMLI Residential are developing the residential portion. The buildings will share underground parking.