GMD plans 170 affordable units for site on Linden, near Aurora 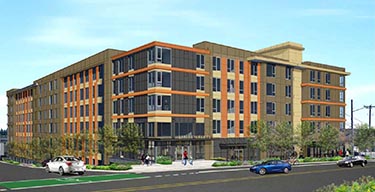 [enlarge]
The complex will be near bus lines and a cycle track, and will have parking. Rents will be at or below 60 percent of area median income.

GMD Development and architect BCRA have gone through the second design review meeting for Linden Flats, a six-story complex with 170 affordable units at 13280 Linden Ave. N.

Linden Flats will be “100 percent affordable,” said GMD's Rebecca Ralston. Rents will be at or below 60 percent of area median income. The project team plans to use the city's multifamily tax exemption (MFTE) program and low-income bonds from the Washington State Housing Finance Commission.

“We're right around the corner” from a building permit and breaking ground, said Ralston, who's aiming for a November start date.

The 67,000-square-foot site hasn't yet been sold, but “we're going to close on the land in the next two weeks,” said Ralston.

The site is near Bitter Lake and the playfield, half a block west of Aurora Avenue North.

The C-shaped courtyard building will have an entrance on Linden. The courtyard will face south to Aurora Shopping Center. Two small retail spaces will face Linden, which has a protected cycle track.

Linden Flats residents will be served by the Rapid Ride E Line and other buses on Aurora.

“We like the location because of the transportation corridor,” said Ralston. Parking wasn't required for the project, but she said Linden Flats will have parking for 130 vehicles (mostly below-grade) so residents will have a variety of transportation choices.

Units will be a mix of sizes, with 18 percent having three bedrooms. “We're not doing micro-units,” she added.

GMD specializes in affordable housing, but Ralston said this project is “a little different in that we've designed it to look like market-rate.”

BCRA is also doing landscape architecture and civil engineering for Linden Flats. Yu & Trochalakis is the structural engineer. Sierra is the general contractor.