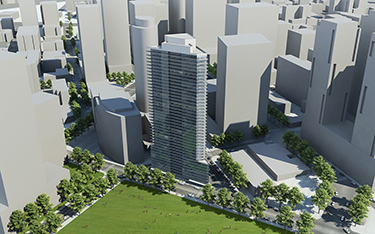 The seller was Shilla Inc., an entity of the Koh family, which acquired the property in 1988 for $480,000. The Shilla Korean Japanese Restaurant was one of the oldest eateries in the South Lake Union neighborhood, operating there for 30 years.

Located at 2300 Eighth Ave., bounded by Denny Way and Bell Street, the triangular property is 9,878 square feet in size. The Shilla building dates to 1970; excluding that structure, the deal was worth about $845 per square foot.

Zoning for the site would permit a tower up to 400 feet in height. Preliminary notes on file with the city from Caron Architecture indicate a possible 326 dwelling units, 175 parking spaces below grade and 5,000 square feet of commercial space. The project would include a possible 320,000 square feet of residential space. On its website, Caron also has a feasibility study for a high-rise hotel and apartment building it provisionally calls Shilla Tower.

Last year, Wuhan Boshengshiji and the city of Tacoma announced Century Plaza, a $135 mixed-use project for a 6.4-acre site near the UW Tacoma campus that the Chinese company's American subsidiary will purchase for $3.5 million. The city says the start date for that project has been pushed back to the fall of 2017.