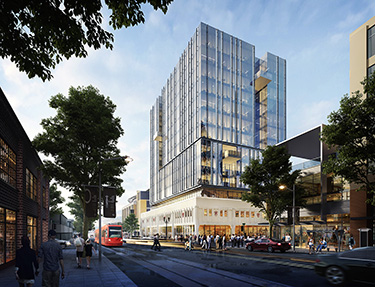 Image by Perkins + Will [enlarge]
400 Westlake will preserve the facade, and add 12 floors to the two-story building at Westlake and Harrison.

The old Firestone auto care center at 400 Westlake Ave. N. in South Lake Union is surrounded by new buildings, and now there's a plan to add 12 stories of office space to the 1929 structure.

Martin Selig Real Estate filed plans with the city for the expansion and will present them next week at the initial design review meeting.

A Selig LLC bought the 19,440-squre-foot property last December for $17.5 million. The site is at the northeast corner of the intersection of Westlake and Harrison Street.

In April, Selig submitted the two-story building to Seattle's Landmarks Preservation Board, which nominated the terra-cotta exterior as a landmark.

Early images by architect Perkins + Will show the preserved facade with a new 160-foot office tower above it.

Martin Selig said if he can get design approval and permits, he will break ground next year and finish the 230,000-square-foot building in about 15 months.

“That's gonna be built without a tenant,” he said. “We've had tremendous tenant demand. It's right smack in the middle of Amazon city — and the biotechs.”

Three prospective tenants have expressed interest in leasing the whole building, said Selig. Floorplates would be under 19,000 square feet — a little smaller than the building footprint.

400 Westlake's second floor would preserve the small original windows — now painted over — in the landmarked facade. That level, said Selig, would probably be used as a conference space. A setback on the third floor would permit one deck, and Selig said there will probably be a deck on top.

Selig said his team tried cleaning the facade and “scraped seven coats of paint off that puppy” to get back to the original white terra cotta. The facade will be preserved, but not disassembled during construction. “We'll level it up and build within it.”

400 Westlake will have three levels of underground parking for about 140 vehicles, accessed from the alley on the east. That means digging into contaminated soil.

“A gas station used to be there,” said Selig, “but it's not that serious.” The old fuel tanks were removed in 2014.

“We're holding everybody off on the retail,” said Selig. The lobby and retail space haven't been apportioned yet. Selig said he has heard from interested parties, including a supermarket, for up to 15,000 square feet.

The Firestone Auto Supply & Service Store may be the last remaining example of SLU's old auto-row identity. And yet, said Selig, “I never got tires there.”