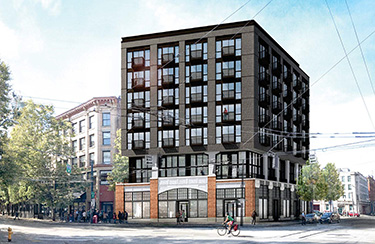 Image by Hewitt [enlarge]
The Cannery will have one level of underground parking, accessed via a car elevator on the alley.

Building anything in Pioneer Square is difficult enough, given the small lots, watery soil, lack of developable land and historic-preservation requirements.

Yet that's not stopping property owner Ron Amundson and developer Maria Barrientos from persisting with The Cannery.

About two years ago they announced plans for a nine-story apartment building at 213 S. Main St. that would preserve part of an existing facade. The plan was presented to the Pioneer Square Preservation Board, which serves as the city's design review for the historic neighborhood. But nothing happened. Why?

“Basically we realized it was not a feasible project, because we couldn't get the parking,” said Barrientos. Three levels of underground parking were planned for a concrete and steel building, but “the soil and the shoring requirements were even more complicated than we thought.” Digging such a deep pit on the 5,760-square-foot property would've been prohibitively expensive.

Today, however, Barrientos goes back to the board with a reduced plan: seven stories, 54 units, rooftop deck, eight parking spaces below grade and about 3,000 square feet of retail. The board meeting is at 9 a.m. at City Hall, 600 Fourth Ave., Room L2-80.

“We had to abandon the high-rise idea,” she said. “We couldn't provide enough parking for luxury.”

Instead The Cannery will have only one level of underground parking, accessed from a car elevator on the alley. This is the first project where Barrientos has used such an elevator, because a ramp would've eaten up too much space.

Concrete and wood-frame construction will be used for the structure, which will be 89 feet tall at the parapet line. Total project size will be about 50,000 square feet.

The mix of units has also changed. “We have no two-bedrooms” in the new plan, said Barrientos. “We wanted to make it affordable.”

Studios are expected to rent for around $1,200. There also will be one-bedroom units, and the entire second floor — with a ceiling height of 18 feet — will have lofts with mezzanines.

“Twenty percent of the units will be affordable,” she said, determined by a percentage of area median income.

The multifamily tax exemption (MFTE) will also be employed on The Cannery. “It's going in under the old zoning,” she said, meaning pre-HALA.

Barrientos said the market also has changed since 2014, with more single people living downtown. She noted that units in the Publix apartments, nearby in the International District, leased up swiftly.

The Cannery name refers to the crumbling one-story structure now on the site, once home to a cannery workers' union. It was originally built in 1900 as a three-story structure, occupied by the Cascade Laundry. In the late 1920s, it was sliced into a trapezoid by the Second Avenue South Extension. After sustaining damage in the 1949 earthquake, the building was reduced to a single story.

The building has been empty since the late 1980s.

“It's pretty much collapsed,” said Barrientos. “It's so dangerous that no one can go in.”

Pending final permits, “We would like to start construction in the early spring,” she said, and finish by late summer of 2018.

The retail space could be configured as one or two units, though the site is probably too small for a restaurant. “An art gallery would be awesome,” Barrientos said, or a coffee shop for the prominent corner location.

Barrientos and Amundson have collaborated on other mixed-use projects. “Ron owns a lot of small parcels around town.”

This one, said Barrientos, is “incredibly inefficient to develop,” but she'd consider another project in Pioneer Square. “We'd just need a bigger site.”