Lennar and Regency have plans for housing, grocery at 23rd & Union 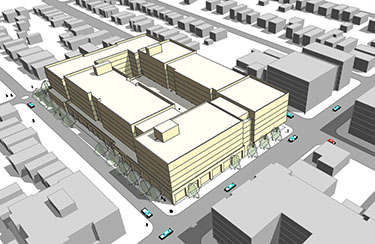 Image by Encore Architects [enlarge]
There would be 475 housing units on two parcels, with ground-floor retail and underground parking.

Tonight Lennar Multifamily Communities and Regency Centers will show their plans for the full block at 23rd and Union where a low-rise retail complex called MidTown Center now is located.

The early design guidance meeting is for the 2.44-acre site at 2301 E. Union St. The property is bounded by East Spring and Union streets, and 23rd and 24th avenues.

Lennar and Regency are two large Florida-based developers. Lennar is active in the Seattle apartment market, while Regency specializes in shopping centers.

The 106,000-square-foot site has long been owned by the Bangasser family of Seattle.

Just before Christmas, Lennar and Regency announced they have reached a deal to buy the block, and said they have a conceptual plan “for inclusive redevelopment of the property.”

Their statement read, “With help from Forterra, a local sustainability non-profit with deep experience helping facilitate complex land transactions, the ‘preferred option' in our [early design guidance] packet includes an opportunity for Africatown [Community Land Trust] and strategic partners to own and develop approximately 20,000 square feet of property within the 23rd & Union full-block site.”

Regency is under contract with the property owner, but the statement said the deal depends on the city completing zoning changes early this year that are associated with the Central Area Mandatory Housing Affordability legislation, which is part of HALA.

The complex is being designed by Encore Architects. The overall plan being presented tonight is for 475 housing units on two parcels, more than 50,000 square feet of ground-floor retail and underground parking for 370 vehicles.

Lennar had previously asked the city for a contract rezone to allow structures up to 85 feet.

One would be a seven-story, horseshoe-shaped structure along Union Street, with a tenant courtyard set on a podium. It would contain 355 units, including about nine townhouses. 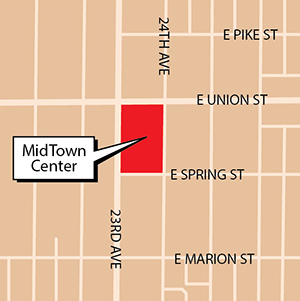 A large expanse of retail in the northwest corner of the building is labeled as a grocery, and a pharmacy is also indicated along Union. The garage would have 245 parking spaces for residents and 125 spaces for commercial use.

A pedestrian walkway would cut through the block, separating this building from a smaller building facing Spring that would be owned by Africatown Community Land Trust. Lennar and Regency said that creating two sites would let the neighborhood group develop the Spring Street parcel and retain community ownership within the block. The smaller parcel would measure about 23,000 square feet.

Lennar and Regency said the preferred option for the Africatown building will contain neighborhood retail and community office space, with about 120 units of affordable housing above.

There is no design and construction team yet for the Africatown building. Lennar and Regency said it has not been determined whether the site would be purchased from Regency or from the Bangassers.