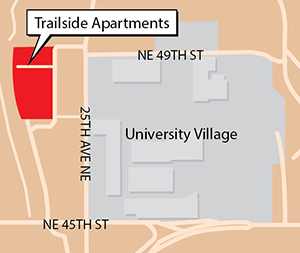 Plans filed with the city indicate two 65-foot-tall buildings over a shared garage, with about 300 units. All existing structures would be removed. Construction is expected to begin in late 2018 or early 2019. Weber Thompson is the architect.

Trinity acquired Trailside in 1994 for $5.35 million. The property was developed in 1959, when the trail was still being used intermittently as a railroad line. Trailside now has eight three-story buildings with 120 units and surface parking.

Preston Hart is the development manager for PPC. “It's actually our first project in Seattle,” he said of Trailside. “There's a lot going on in Seattle, strong job growth. It's emerged.”

Privately held PPC was founded in 1994 by J. Blake Pogue, who is listed in city records as the financially responsible party for the new Trailside project, and as the property lessee. Hart said the company has ample experience in “multifamily market-rate housing and student-oriented housing.” In the latter category, he cited projects near UCLA, the University of Texas, the University of Virginia and other universities. The PPC company website also lists current multifamily projects in Boston, Nashville and other cities.

Weber Thompson's initial site plan indicates a total project size for the two buildings of about 340,000 square feet. The plan also shows that the dead-end of Northeast 48th Street, which terminates at the trail, would be vacated. This would require city approval.

Underground garage parking is indicated for up to 300 vehicles, but Hart said that number is likely to decrease, given the location. “We're still working on the mix” of units and parking spaces, he said. “We're well aware that site is very bike- and pedestrian-oriented.”

Current zoning for the site, which is outside the recent University District upzone, is LR3. Hart said that specific zoning issues and parking requirements would be addressed by Weber Thompson and a consultant or consultants that PPC is looking to hire. “We're going through the city process now,” said Hart.

In a press release from PPC and Trinity, the Trailside project is described as “pedestrian/bicycle-focused student housing” with a mix of furnished and individually leased units. The apartment mix will include studios and units with one to five bedrooms. Amenities will include rooftop decks, large television and social lounges, study areas, bicycle rooms and a fitness facility.

In that statement, Hart said, “This is an incredible location, and our goal is to create a high-quality building that builds off the site's immediate access to the Burke-Gilman Trail, University of Washington and University Village.” The location is also walkable to the light rail station at Husky Stadium.

By phone, Hart said of the location, “As far as real estate goes, it doesn't get much better.”