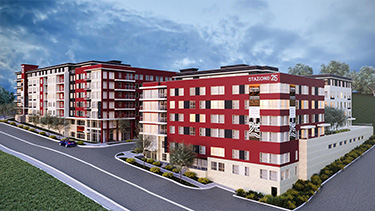 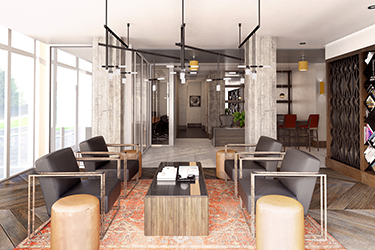 It will have two mid-rise buildings at 2615 25th Ave. S., just west of Rainier Avenue South, with a mix of unit sizes, from studios to two-bedroom apartments. Osborne Construction Co. is the general contractor and Morgan Design Group is the architect.

The project ownership group is led by investors Michael Ross and Robert Spitzer. The owners also announced a $77 million HUD loan to help finance the project, along with EB-5 investors.

Ross and Spitzer are working with developer Steve Smith on Stazione: 25.

In a statement, Spitzer said, “It's been a long road to get here since we started acquiring the parcels on this block in 2008 — during some very difficult years for holding, let alone developing, raw land.” He recalled 2009-2012 as “a pretty bleak period for mere mortals (versus institutions) to be in the real estate development business.”

They acquired the 1.5-acre site for a reported $4.6 million.

A subsequent contract rezone allowed the two buildings to be seven and eight stories tall.

Stazione: 25 will be a five-minute walk north of the Mount Baker light rail station, and have 221 parking spaces below grade. Amenities will include a roof deck, community rooms, garden space and a fitness center. No retail or commercial space is included.

The project is scheduled for completion in the summer of 2019.