Fat City site on Denny has sold for $8.1M 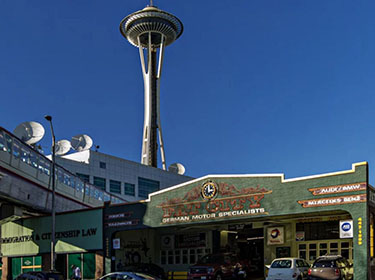 Photo by Berkshire Hathaway HomeServices NW [enlarge]
The monorail runs above the corner of the property at Fifth and Denny.

The Fat City auto repair property at 508 Denny Way has sold for $8.1 million, according to King County records.

Paul Poirer of Berkshire Hathaway HomeServices Northwest Real Estate put it on the market this spring, and told the DJC in May that the property was under contract.

The sellers are a married couple, Jesse F. Berger and Carol L. Edward, who acquired the two attached one-story buildings in 1994 for $750,000. Their businesses are still there, though Berger sold his interest in Fat City about a decade ago. Edward still has an immigration law practice there at 500 Denny.

The monorail runs above the southwest corner of the property, with a city easement that deducts about 3,000 square feet from the 13,500 square feet of developable land. Excluding the cost of the buildings, the sale was worth about $600 per square foot of land — or closer to $800 per square foot, allowing for the easement.

The buyer of the corner site, at Fifth Avenue North, was Allgreen Holding Limited LLC. The Secretary of State's corporations-search website was down on Thursday, making it difficult to trace the parties behind that LLC.

In other public records, Allgreen lists a lawyer in Seattle and a mailing address at the Belle-View Office Park in Bellevue. That property was acquired in April for $19 million by an LLC whose governor is Lili Lu, an executive with the Bellevue-based Chinese investment and development firm Create World America.

The Fat City site is due for an upzone, with a city council vote possible soon. If approved, the upzone would allow commercial structures up to 125 feet, and mixed-use residential up to 160 feet.

Since the property was listed for sale, an architect at CollinsWoerman has asked the city about a possible eight-story apartment building, and how the monorail easement might affect that.

Whether a tower could be partly cantilevered over the monorail, as Paul Allen's Museum of Popular Culture now does, will be up to Allgreen and and city to decide.