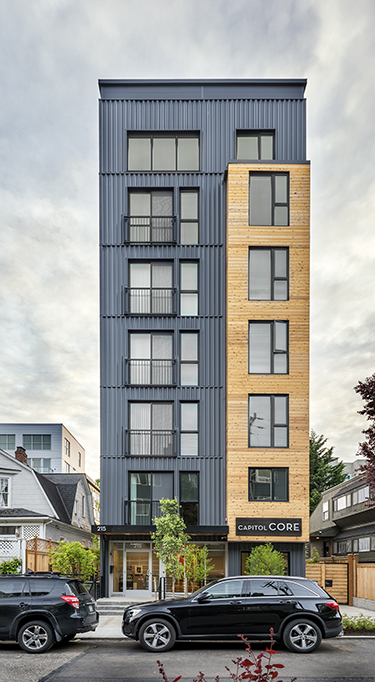 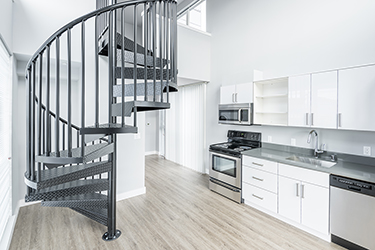 JaMar Investments in May opened a six-story, 17-unit apartment building called Capitol Core on a small site in the Capitol Hill neighborhood of Seattle.

The project at 215 Boylston Ave. E. was designed by NK Architects and built by Cascade Built.

The 2,700-square-foot site is blocks from nightlife and the light rail station on Broadway, and a short walk to South Lake Union and downtown, NK said in a press release.

The apartments have full kitchens with locally crafted cabinetry and energy-efficient appliances, including a washer and dryer. The building has a lobby, shared outdoor space and bicycle storage in the basement.

The architect said the building maximizes its small infill lot with a unique linear design.

Jim Snelling and his wife own the project, which they developed as JaMar Investments. A four-unit apartment building was on the site.

In a 2015 article in the DJC, NK said it is efficient to build a tall project like the Snellings' in terms of land and foundation costs. It said tall, narrow buildings like this make sense in neighborhoods where there is high demand, including Ballard, Wallingford, Fremont, Queen Anne and Capitol Hill. They can be built in mid-rise zones where multifamily construction is allowed to 65 feet.

In that article, a city of Seattle official said a 2010 change in development standards for multifamily zones — including relief from setback standards — makes it possible to build more units on smaller lots like the one the Snellings own. Their project is unusual, Snelling said, but he wouldn't be surprised if more were built in mid-rise zones where there are similar size lots. However, he said, there are very few mid-rise areas where that exists — and where there are also no requirements for parking, a key to making such a project viable.