Madison Centre opens, with 70% of the office space still available 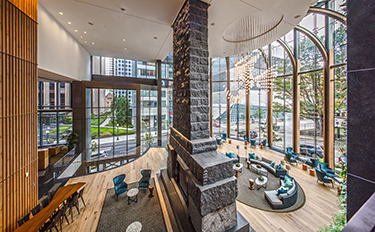 Photo by Michael Walmsley [enlarge]
The 37-story tower’s most striking feature may be the three-story glass rotunda, with interior stairs, a green wall, fireplace and public seating. 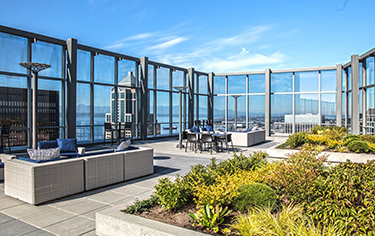 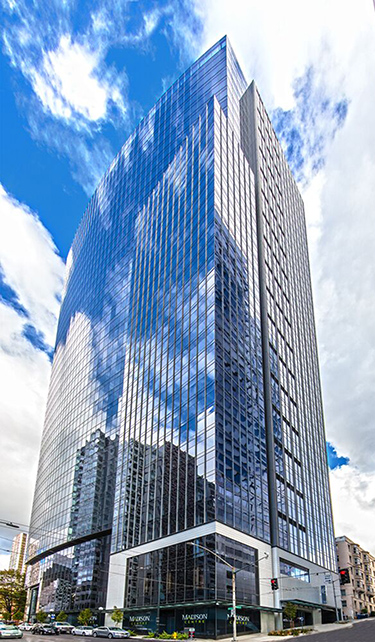 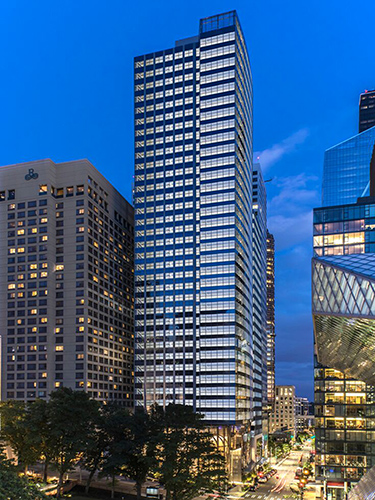 After more than a decade of planning, Madison Centre has opened at 505 Madison St.

Schnitzer West developed the 37-story tower, which is on the west half of the block also bounded by Fifth Avenue and Marion Street. (The official marketing address is 920 Fifth Ave.)

Construction began in 2014. It was designed by NBBJ and built by Sellen, with 746,000 square feet of office space. Floor plates average around 22,000 square feet.

Schnitzer says the office space is 30 percent leased. The first tenant is expected to move in this week, with more following in January.

Davis Wright Tremaine announced last year that it will lease eight floors. The law firm will move from 1201 Third Ave., where its eight floors and 182,341 square feet are now being marketed by JLL.

Broderick Group is leasing the building for Schnitzer, and says there are still 525,095 square feet available. In its third-quarter market report, Broderick lists three big blocks of contiguous space at Madison Centre: 246,000, 102,000 and 89,900 square feet. It appears the top three floors are also unclaimed, with about 66,000 square feet.

Madison Centre was designed as a multi-tenant building, unlike F5 Tower and 300 Pine, which this year were leased to single tenants F5 Networks and Amazon, respectively. Rainier Square, with its 722,000 square feet of offices, could have been single-tenant or multi tenant. But Amazon took it all, even though it won't be delivered until 2020.

Madison Centre's most striking feature may be the three-story entry rotunda, with interior stairs, a green wall, fireplace, quiet library area and public seating. The rotunda measures about 5,000 square feet.

Washington Athletic Club will operate an on-site fitness center for tenants, and there are conference rooms and other amenities.

Schnitzer's financial partner on this project is Barings LLC. Cornerstone Real Estate Advisers joined the project in early 2016 with a $150 million equity contribution from one of its institutional clients. Cornerstone later merged with Barings. Soon thereafter, HFF arranged a $225 million construction loan through Blackstone Real Estate Debt Strategies and Bank of the Ozarks.

(Editor’s note: The story has been changed to clarify the name of the financial partner, and the marketing address.)

Schnitzer began planning and assembling land for the project a decade ago, when it was called M5 Commerce Center. The site was previously occupied by several small structures including the former home of the College Club of Seattle.

Schnitzer originally spent about $17.6 million for the 28,320-square foot site, and also paid $3 million to buy the development rights of the five-story Dover Apartments, just up Marion at 901 Sixth Ave.

Schnitzer tried to sell the project in 2009, during the recession. In 2012, Schnitzer said it wouldn't begin construction without pre-leasing at least some of the space.