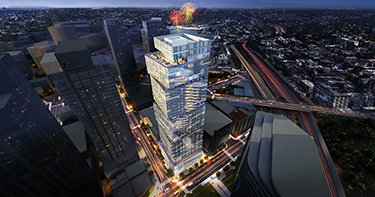 Following a recent sales event, when condo buyers actually camped on the sidewalk, Realogics Sotheby's International Realty says that the Nexus condominium — now under construction in the Denny Triangle — is 90 percent pre-sold. RSIR is marketing the project for Vancouver, B.C.-based Burrard Group. Dean Jones of RSIR said all 28 City Suites units recently sold for between $340,950 and $667,950, some without parking spaces, which can be separately purchased for $75,000. The suites are a mix of studios and urban one-bedrooms, and range from 354 to 498 square feet. “It felt like Black Friday, except it was a Saturday, and these are condos,” said Smith. “Our sales success demonstrates the pent-up demand for efficiently scaled and attainably priced new condominiums in downtown Seattle.” Designed by Weber Thompson and being constructed by Skanska, the 389-unit, 41-story Nexus is expected to open in 2020.