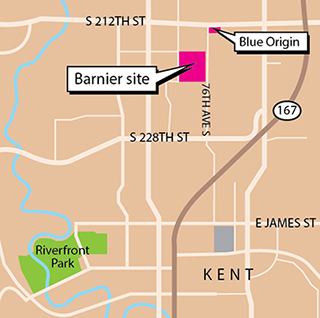 Blue Origin, the Kent-based aerospace firm owned by Jeff Bezos, has added to its holdings in Kent with a 31-acre land purchase just southwest of its headquarters.

The $14 million transaction was recorded last week by King County. The site is at and around 21600 76th Ave. S.

The seller was Bar-Gem LLC, an entity of the Barnier family, which had owned the property for many decades.

The Seattle Times has reported that Barnier family members began farming there in the 1800s. The Barniers were in their fifth generation of farming as late as 2009, though the agricultural land has gradually been sold off.

The buyer was Blue Properties LLC, which is governed by Blue, Inc.

Brokers, if any, were not announced.

The four parcels lie between 76th and 72nd avenues South. The Interurban Trail and a creek run through the site.

The mayor of Kent, in April's state of the city address, stated that Blue Origin was planning to develop the Barnier property. The city planning department confirmed last week that office/warehouse structures are in the early permitting process. No other details could be confirmed before deadline.

The city of Kent has estimated that Blue Origin now has 750 people working in Kent, with plans to add hundreds more. The Seattle Times puts the current headcount at 600.

The company also has a large facility in West Texas, where it launches reusable spacecraft into space.