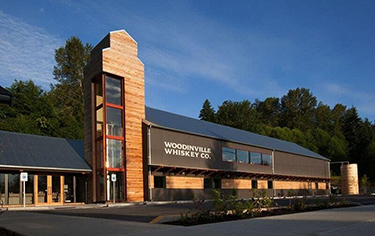 The Woodinville Whiskey Co. property, at 14509 Redmond-Woodinville Road N.E., has sold for $3.8 million, according to King County records.

The seller was Hollywood Garage LLC, which developed the property in 2013. The buyer was Woodinville Whiskey Company LLC, which operates the distillery and tasting room.

The roughly one-acre site is just west of the Sammamish River, close to several wineries including Chateau St. Michelle. It was acquired in 2012 for almost $900,000 by a group including developer Christopher Faul.

The land was then divided, redeveloped and made into a condominium.

The new 7,000-square-foot building was constructed for the distillery, which was founded in 2010.

On the same site, the older, original Hollywood Tavern remains under separate ownership. The tavern was originally a gas station, and was converted into a roadhouse in 1947.

Last summer, Moet Hennessy announced its acquisition of Woodinville Whiskey Co. for an undisclosed amount. It plans to expand the brand in the U.S. and abroad. Founders Orlin Sorensen and Brett Carlile remain with the company.

Louis Vuitton Moet Hennessy, or LVMH, is an international group has a market capitalization of about $121 billion. Its brands include Bulgari, Dior, Givenchy and Krug.