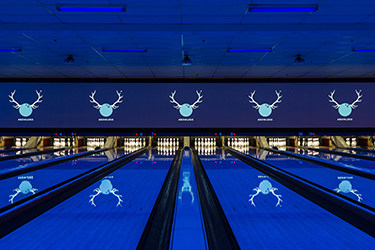 Seattle has seen most of its bowling alleys close, but Lynnwood celebrated the opening of Bowlero last weekend at 1222 164th St. S.W.

The 40-lane facilty has high-definition video walls, free Wi-Fi, lounge seating and a bar with fireplaces.

The alley previously operated as Brunswick Majestic Lanes, which opened in 1990.

The Everett Herald reports that the facilty received a $2.4 million renovation.

There are over 47 Bowlero locations in California, Texas, Florida, New York and other states.

Bowlero was launched in 2014 and is owned by the former Bowlmor AMF, the largest owner and operator of bowling centers in the world, with over 300 locations. That company was formed by the 2013 merger of Bowlmor Lanes and AMF Bowling Worldwide.