By BRIAN MILLER
Journal Staff Reporter
Rendering by Weber Thompson [enlarge]
Weber Thompson is designing this 44-story mixed-use tower at 2019 Boren Ave. for Holland, and also submitted an initial plan for another tower at 1000 Virginia. 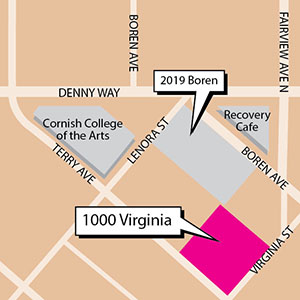 Four months after Cornish College agreed to sell one property in the Denny Triangle to Holland Partner Group, a new deal has been announced for the southwest corner of the same block.

Cornish announced last week that it will sell the 14,400-square-foot property at 1000 Virginia St. to Holland. No price was disclosed.

The deal is expected to close next year, and the college plans to continue using the existing two-story warehouse through the 2019-2020 academic year.

Weber Thompson submitted an initial plan for the 1000 Virginia site for Holland, and is also designing Holland's 44-story mixed-use tower at 2019 Boren Ave., on the northeast corner of the block.

2019 Boren will be developed on three parking-lot properties owned by Cornish, Bellwether Housing and Recovery Cafe. Those sales are expected to close this year.

Holland only provides a few details on the site plan for 1000 Virginia. The building footprint measures 13,070 square feet.

The size is zoned for construction to 440 feet. Holland's plan says that 1000 Virginia will also be 44 stories, even though the site is 33 percent smaller than 2019 Boren.

The plan is for apartments, but the number of units isn't specified. There will probably also be some retail or commercial space.

Vancouver, Wash.-based Holland is known as a multifamily builder and developer. It did not provide any details in the Cornish press release.

The main entrance would be on the corner of Virginia and Terry Avenue, and garage entrances are also indicated on Terry and the alley to the east.

Cornish acquired the 1000 Virginia property, also called Centennial Lab, in 2011. The non-recorded price of $3 million came in the form of a legal judgement against Cornish's former landlord, with which it has a prior sublease and purchase agreement. The matter was resolved in King County Superior Court.

Cornish Acting President Star Hang Nga Rush said of the 1000 Virginia sale, “We are very excited to be working with Holland on these developments. They have been great champions of our students, offering them many opportunities through our Creative Corridor arts elective classes to design site-specific artworks at other Holland projects.”

2019 Boren had its first design review last week, and the board reportedly recommended that it move toward a MUP. The program is for 426 units on floors six through 43, with a rooftop deck and amenity space.

2019 Boren will have six levels of underground parking for 350 cars, to be accessed from the alley.

Holland should have plenty of cash for both projects. In December, Holland and Japanese financial partner NASH sold Westlake Steps for $324 million.

Holland is also working on several other projects: a 41-story tower with 461 units at 970 Denny Way, also in the Denny Triangle; 85 units in a skinny, mid-rise building at 1101 Westlake Ave. N. in South Lake Union; and a 251-unit redevelopment of the old Safeway on Upper Queen Anne, which will include a new grocery store.