Rendering by Clark|Barnes [enlarge]
Clark|Barnes is designing a six-story, 244-unit project for the site at Aurora and Northeast 192nd Street that is expected to break ground next year and open in early 2021.

The RapidRide E Line already links Shoreline to downtown. And two light rail stations are scheduled to open in Shoreline in 2023. For that reason, Trent Development has invested in two transit-oriented development sites in that city.

Trent paid almost $5.5 million this week for 1.65 acres at 19022 Aurora Ave. N. The 1965 warehouse/retail structure, used most recently as a gym and a bike shop, was sold by the Pearson family, which had owned it for decades. The site is directly east across Aurora from the Shoreline Park & Ride.

Earlier this year, Trent Development paid almost $4.3 million for four residential parcels on the east side of Interstate 5, about two blocks from the future light rail station at Northeast 185th Street.

Trent Mummery has given the two projects the working titles of Shoreline 192, which will begin first, and Shoreline 185, which will wait a few years.

“We think Shoreline is ideally situated to support the tech boom in the downtown core, because of the close proximity and the ability for people to get there with RapidRide and light rail,” Mummery said.

• Shoreline 192 has begun the city permitting process. The six-story, 244-unit project should break ground next year and finish in early 2021. Clark|Barnes is designing the building, which will have 225 underground parking spaces and about 10,000 square feet planned as a gym. The triangular property is on the southeast corner of Aurora and Northeast 192nd Street. Additionally, the county's Swift shuttle bus will run from the Park & Ride to the light rail station at 185th, when that opens.

• Shoreline 185 is projected to have six stories and 180 units, some of them affordable. Clark|Barnes is doing preliminary design for the project.

Mummery already has considerable experience in the north end. While at Metropolitan Companies, he developed the 129-unit Malmo, at 1210 N. 152nd St., which opened three years ago. And leasing will begin soon for Metropolitan's 221-unit Paceline, at 17202 Aurora. 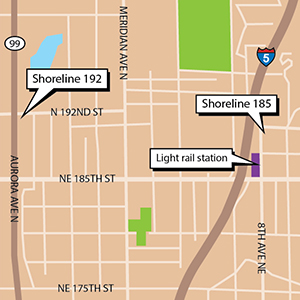 He adds, “Shoreline is well positioned for folks who want to live a little closer to the city, but [if] they work north at the Boeing campus or commute east to the Bothell tech campus, I would argue that Shoreline is more centrally located to all of the major tech centers than even Capitol Hill, and it is certainly more affordable.”

The city of Shoreline certainly agrees with him. It has rezoned areas around the future light rail stations for more density. The second, south Shoreline station is nominally at Northeast 145th Street, on the border with North Seattle. Its actual location is between Northeast 147th and 148th streets, where the Park & Ride is now.