By MELISSA ENGLISH and HUI TIAN
Special to the Journal

“You’ll like Tacoma” was a slogan first introduced at the Alaska-Yukon-Pacific Exposition held in Seattle in 1909 as a publicity campaign, yet it still rings true today. With extremely low vacancy rates in Tacoma and steadily rising rental rates in King County, now many developers are finding that they like Tacoma too.

One such developer is HQC USA LLC, whose parent company Hoang Quan Group is headquartered in Vietnam. HQC selected Tacoma for its first housing development in the United States. As Seattle struggles with housing affordability, HQC expects renters will “like Tacoma.”

In August 2016 the company responded to a request for developer interest issued by the city for a vacant lot next to the Tacoma Public Library’s Main Branch in downtown. The request sought medium-density midrise multifamily infill for the underutilized parking lot.

HQC was selected by the city to develop the surplus property, and a purchase, sale and development agreement was executed.

The infill project called the Hailey is a $40 million, 166-unit mixed-use development at 1210 Tacoma Ave. S. Twenty percent of the units are designated affordable. Underground parking is provided, including 35 stalls for library staff during business hours.

In October 2017 the project broke ground at a ceremony attended by government officials from Vietnam and the city of Tacoma. Completion is expected in October 2019.

Images by studio19 architects [enlarge]
The $40 million Hailey apartments are under construction at 1210 Tacoma Ave. S.

Marilyn Strickland, Tacoma’s mayor from 2010-2017, was instrumental in efforts to help Asian investors “like Tacoma.” She sought to foster international development in Tacoma. During her time in office she took three trade missions to Asia, including an April 2016 trip with other city officials to Vietnam and China.

Hoang Quan Group, the parent company to HQC, is one of the largest social housing developers in southern Vietnam. Bingham said they toured some of Hoang Quan Group’s projects and the company expressed interest in Tacoma.

Bingham serves as the city’s lead for the project and holds biweekly meetings with the design team to ensure a smooth permitting process, especially since the purchase, sale and development agreement includes specific milestone dates for various phases of the project.

HQC is led by Peter Truong, director and managing member. Truong discovered Tacoma during his time as an international student in Washington state when his family was visiting from Vietnam. They traveled south to Tacoma and thought it was a good time to invest.

When asked about his favorite aspect of Tacoma, Truong said, “The mayors — former Mayor Strickland and Mayor Woodards — are very welcoming and supportive. Tacoma has all the fundamental elements of a growing city.”

With this being the first U.S. development, Truong acknowledges that there are cultural differences in doing business. Truong credits the professional team assembled for the project with delivering on its promise to help him along the way. 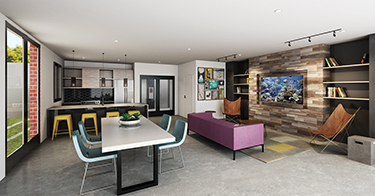 [enlarge]
A market study found that renters in Tacoma want the same luxury amenity spaces found in Seattle apartments, such as this lounge.

For example, the number of permits required in Tacoma are much greater than those required in Vietnam. The owner’s representative, Charlene Wilson of Andrew Clapham & Associates, said the Hailey has over 20 different permits while the team in Vietnam is accustomed to just two permits for projects there.

Truong has found that Tacoma is flexible and willing to work with developers to meet their needs. When HQC wanted to break ground in November, the city and design team worked together on a phased permitting approach that the city expedited. The early site work permit allowed excavation to begin prior to building permit issuance.

“We learned in May that the groundbreaking ceremony would be held in November,” said Doreen Gavin of AHBL, principal civil engineer for the project.

“We saw that as an opportunity to fast track the site permitting by collaborating with the city. We walked the site with city staff and then AHBL prepared the design and the site development permit submittal in about four weeks. In turn, the city reviewers turned around their comments in about four weeks.”

Thanks to this collaboration and commitment, the site permits were issued in time for the ceremony.

HQC did not try to replicate what the parent company was developing within Vietnam. Instead it prepared a market study to inform the decision-making process. Truong said the economic and market report they prepared found that demand for affordable and market-rate housing was the same.

Given this, HQC set aside 20 percent of the units as affordable. By doing so, the project qualifies for the city’s Multifamily Property Tax Exemption Program. This incentive allows the project to be exempt from property taxes on the improved value of the land for 12 years. According to city documents, these units must be “affordable to renters with household incomes no greater than 80 percent of the area median income.”

The study also found that the market wanted the same standard of luxury amenity spaces as found in the Seattle market. The response was to put quality, common area amenities into the Hailey, including a lounge, fitness room, yoga studio, pet wash station and quiet study areas. A level two deck includes a terrace with fire pits, indoor/outdoor seating, and outdoor cooking station.

Truong said he’s focused on finishing the Hailey but is open to the next development project in the U.S. for the right opportunity. As construction continues on the Hailey, he reports back to Vietnam with bimonthly progress and returns to Vietnam for in-person updates each month.

Truong says it is an “exciting time for Tacoma” with the anticipated population growth over the next five years and he “expects a fantastic result” with the completion of his project.

Melissa English is the marketing director for AHBL and calls Tacoma home. Hui Tian is a principal and architect at studio19 architects, and she is the principal-in-charge for the Hailey apartments.