University Christian to sell, with demo and redevelopment likely 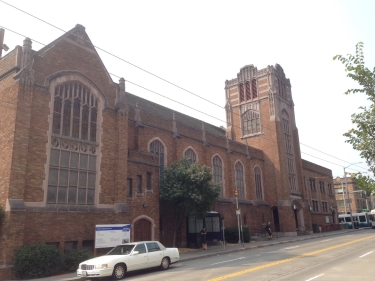 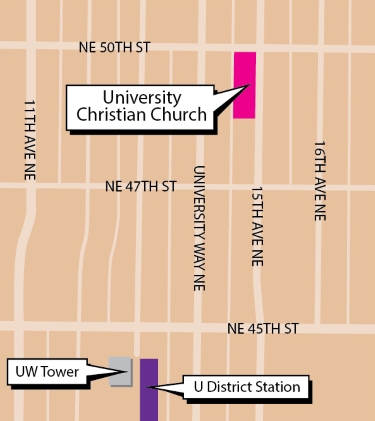 Two years after selling its parking lots on the east side of 15th Avenue Northeast for $4 million, University Christian Church has announced that it will sell the main church property across the street at 4731 15th Ave. N.E.

The 90-year-old church is on the southwest corner of 15th and Northeast 50th Street. The property totals 32,960 square feet, according to the county. It's zoned for construction up to 65 feet.

Dave Rothrock and Doug Barrett of Meriwether Advisors are representing the church.

The masonry building, like any church-owned structure, cannot be landmarked, so demolition appears inevitable.

According to a Monday press release, the congregation voted this summer to sell. Worshippers and staff will join a Lake City group to form a new entity called Journey Christian Church.

The church said that, “ Proceeds from the sale will go into a foundation established by remaining UCC members. Funds will be used to advance causes consistent with the church's mission.”

The release also cited an “ongoing decline in membership and inability to financially support operations and maintenance of the large, seismically-fragile facility.”

Numbers for the decline in congregants weren't given, but virtually all Seattle churches have experienced the same fate in recent decades. Many of those churches have sold to developers and moved to smaller facilities.

In a statement, University Christian president Laura Robinson said, “While the sale of our existing house of worship is bittersweet, we look forward to continuing UCC's legacy through the new foundation, which will benefit causes near-and-dear to our congregation's hearts.”

The news comes one month after University Temple United Methodist and University Lutheran Church announced that they, too, would sell and redevelop. Those two churches have experienced steep declines in members.

Unlike University Christian, those two churches will combine facilities and retain an ownership stake in a high rise expected to take shape on the University Temple property at 1415 N.E. 43rd St. University Lutheran, at 1604 N.E. 50th St. has low-rise single-family zoning. They are also being represented by Meriwether's Rothrock and Barrett.

Established in 1890, University Christian moved to the U District in 1901—first to 42nd and Latona, then to its present location. There, its first wood-frame building was constructed circa 1915.

The current two-story Gothic revival building, with its distinctive bell tower, was constructed in the 1920s, and opened in 1928. Its architect was Robert Hall Orr (1873-1964), whose practice was primarily in Los Angeles. The stained glass windows were designed by local artist Anton Geza Rez. The main building originally seated 1,500 congregants. A chapel, designed by NBBJ, was added in 1960.

The 2016 sale was to affordable housing developer Bellwether Housing, which recently opened the 133-unit, seven-story Arbora Court at 4750 15th. That deal was worth about $133 per square foot.

That sale, and University Christian's anticipated next sale, are among several associated with the early 2017 upzone of the U District, where light rail service will begin in 2021. Several other longtime property owners have put properties on the market, sold or announced redevelopment plans.