The Imperial Lanes block, at 2101 22nd Ave. S. in the Rainier Valley, has been subdivided and sold in two transactions worth about $6.5 million, according to King County records.

The seller in both deals was 22nd Ave South LLC, which acquired the now-closed bowling alley in 2016 for $6.5 million. The property was subdivided in May.

The buyer of the larger south parcel was Two Schools LLC, a venture of Lake Washington Girls Middle School and Giddens School, which will build a new shared facility. That portion totals 42,241 square feet, and sold for about $4.1 million. Public records indicate a loan from Columbia State Bank.

Brokers, if any, were not announced. The seller is an LLC associated with musician Dave Matthews, who has a child at one of the two small private schools.

The block is between South Walker and South Hill streets, and one block west of Rainier Avenue South. The 24-lane bowling facility that operated there from 1959-2015 will be razed.

The Two Schools building will be at 2100 S. Walker St. It's being designed by Graham Baba Architects, with consulting architect Anjali Grant Design. 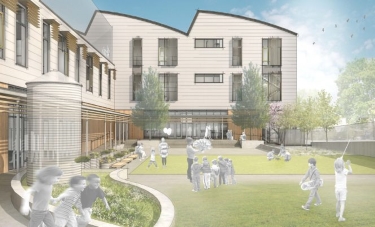 [enlarge]
The L-shaped building will be set around a 15,000-square-foot playground on the southwest corner of the block.

The three-story structure will have one level of underground parking for 33 vehicles, with access from 21st and egress from 22nd. A bike room will have 30 stalls.

Total project size, including parking and roof decks, is about 52,498 square feet.

The L-shaped building will be set around a 15,000-square-foot playground on the southwest corner of the block. There will also be an enclosed play area on the roof.

The institutional project doesn't have to go through design review. It received a master use permit last week.

No start date or general contractor have been announced, but Costigan's website says the building will be completed sometime next year.

Costigan says it will serve 200 Giddens students (pre-K through fifth grade) and 100 LWG students (grades six through eight). Costigan says, “Each school will have their distinct entrances and programs connected by large shared spaces such as the gymnasium, library and exterior play area.”

Construction documents indicate that the north parcel will be developed after the south parcel. The north building is called Jazz House in construction easements recorded with the county.

CHH and JazzED say that Weinstein A+U will design their building.

The eight-year-old JazzED will get a new permanent home with about 12,000 square feet of educational and performance space. On the floors above, CHH will have about 100 permanently affordable units, priced at or below 60 percent of area median income.

A six-story building is planned. The property is now zoned up to 65 feet, with an upzone to 75 feet expected. No parking is mentioned or required.

No new plans have been filed for the site, and CHH hasn't specified a schedule for the project.

The two owners will each fund their portions of the project, then own and manage them separately — possibly in a condominium arrangement.

CHH says it received a $2.3 million loan from Enterprise Community Partners to acquire the site. Other funding sources, including the federal low-income housing tax credit, will be employed.

The CHH portfolio now has 49 buildings with about 2,200 residents.

It is currently planning the 78-unit Eldridge at Pine and Broadway; building 110 units in Station House (at Capitol Hill Station); building 115 units in the Liberty Bank Building; and planning about 120 units at 23rd and Union (aka the MidTown Center block), a venture with Africatown that's now called Africatown Plaza.

JazzED says it serves about 900 students annually, from grades four through 12. It now leases space at MLK F.A.M.E. Community Center, in Madison Valley next to the Bush School.