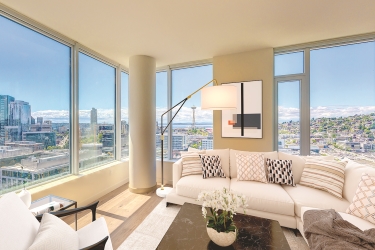 Interior finishes, furnishings and art were designed and selected by Susan Marinello Interiors. Turner Construction Co. was the general contractor.

Greystar is offering six weeks of free rent for units on floors seven and above, and one month free for apartments on floors one through six.

In a press release, the developer said the average unit size is 932 square feet — bigger than typical units around town. Ascent also has a large number of two bedrooms.

Apartments were designed to maximize views. All have Nest thermostats and Blomberg appliances. Motorized shades in some of the units can be controlled with Amazon's Echo and Alexa.

Greystar said Ascent is taller than surrounding office buildings, which have a lower height limit.

An illuminated strip — with a “tech-forward feel” — runs up the north side of the building. This “Z fin,” as Greystar calls it, is intended to draw the eye up from the main entry to the rooftop, and vice versa.

The rooftop has a sliding door that opens the interior space to an outdoor deck, with a covered area, fire pits and space heaters.

The building also has retail space and upgraded cellular. The complex has 340 parking stalls.

Greystar has offices in the U.S., Europe, Latin America and Asia-Pacific countries. It says it is the largest operator of U.S. apartments.

(Editor’s note: The story has been changed to correct several errors that were included in press materials provided for the project.)