Seattle Labor Temple to be sold 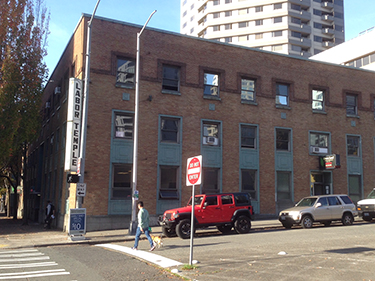 Photo by Brian Miller [enlarge]
VIA Architecture filed early plans a 16-story building at 2800 First that may include the landmarked building’s exterior.

“We ourselves went in to designate the building,” says Erik Van Rossum, an executive with MLK Labor, the labor consortium that owns the building.

That voluntary decision constrains the property's future development potential. But Van Rossum says after debating last year what to do with the aging structure, “The plan is to relocate and create the third Labor Temple... the next awesome Labor Temple, someplace close to the light rail. We're excited. It's a great opportunity.”

“The property has been marketed for sale since June,” says Van Rossum, who manages the building and also leads Unite Here Local 8. Heartland is their broker, and “we have a tentative buyer.” Heartland will also help find a new location for the Labor Temple to buy.

“Eighteen months out is when we'll begin the hunt.” Van Rossum hopes the Belltown sale will close about six months before the anticipated move to a new facility purchased with the proceeds. Heartland will also negotiate any interim lease-back agreements, if needed.

VIA Architecture filed the early redevelopment plan for 2800 First, which will almost certainly have to preserve the landmarked building's exterior — and possibly some interior features.

The plan is for a 16-story residential tower with 250 units and 90 parking stalls on two underground levels.

The plan describes a podium varying in height from two to six stories, indicating setbacks below the main tower, which would be closer to Clay, on the south. Parking would be accessed from Broad.

The property is zoned for residential construction up to 145 feet. Some amount of ground-floor commercial space is likely.

The Labor Temple sits on a half block totaling 26,640 square feet. It's between Clay and Broad streets. The property comprises two structures, and both are landmarked.

The firm of McClelland and Jones designed the original two buildings, which remain its signature work. Harmon, Pray, and Detrich designed the 1955 addition.

The complex is recognizable for its green terra cotta detailing. The overall style is sometimes called modernistic or moderne — as opposed to mid-century modern.

Various individual unions have offices in the Labor Temple complex now, along with the Seattle Labor Temple Association (SLTA), and MLK Labor (formerly the King County Labor Council), which developed the building.

Van Rossum points to several “crippling problems” with the existing Labor Temple, including the need for a costly seismic retrofit and general deferred maintenance.

Another problem is traffic congestion: “Seattle is such a difficult bottleneck for workers to get to,” especially when driving from far-flung jobsites back into Seattle for evening meetings. “With the viaduct coming down, getting to the Labor Temple will be even more difficult.”

That's the paradox, he says, to the current development and construction boom: Lots of jobs for workers, but they have to commute from areas where they can afford to live.

As for the Labor Temple's future location, he points to the south end, “where the working class has relocated.”

This won't be the first time the Labor Temple has moved. Its first location, from 1905 to the early 1940s, was at Sixth and University, where One Union Square is today.

Though its name and organization have changed several times over the years, MLK Labor was established in 1888 as the West Central Labor Union. Today it represents over 150 unions and 100,000 workers.

Depending on talks among the Landmarks Preservation Board, the new owner and architect (which may or may not be VIA), Van Rossum says that the Labor Temple hopes to bring along some artifacts from the current building to its future new headquarters — possibly including the iconic neon sign now facing First.

The Seattle Times reported last year that the nine members of the SLTA were going to vote on the disposition of the building, so the anticipated sale isn't really a surprise.

Other old labor halls nearby have undergone changes of use. The International Brotherhood of Electrical Workers hall is now home to City Church. The old Teamsters building, at 552 Denny Way, was sold and demolished; that property later became part of BRE Properties' Taylor 28 apartments. And the old hall for the Sailors Union of the Pacific is now El Gaucho restaurant.

MLK Labor will be the last such organization to depart the area.