By BRIAN MILLER
Journal Staff Reporter
Rendering by GGLO [enlarge]
This image is from documents filed with the city by Simon Property Group and GGLO about redeveloping the 55-acre Northgate site. The proposal now includes the NHL Seattle Ice Centre.


Simon Property Group and GGLO are ready to roll out more details for the huge Northgate Mall redo.

The first review was in August, before plans were announced earlier this month for a three-rink NHL Seattle Ice Centre. It will be used as a practice facility by the anticipated pro hockey team and also by the general public.

The 55-acre site is at 401 N.E. Northgate Way. The southern two-thirds of the site (about 33 acres) will be redeveloped first, in sub-phases. The north third, roughly north of Mama Stortini's, will wait for a future major Phase II, likely after Northgate Station opens to light rail service in 2021.

The big changes are:

• The 161,837-square-foot Ice Centre, to be located in the north middle section of the site, near the central great lawn. It will be designed by Generator Studio of Kansas City, Missouri

• The 1.1 million square feet of offices is up about 44 percent from August, though still in four buildings

• A second hotel has been added, with 172 rooms in seven stories, northwest of the Ice Centre

• The Lifetime Athletic gym and outdoor pool are no longer on the southeast corner; instead, that indoor facility, with about 145,000 square feet, will go east of the existing food court building. The five-story building will have two pools, two basketball courts and many other fitness areas

• A now larger five-story office building (labeled O1) has replaced some retail, and now includes a 36,700-square-foot grocery store. It will replace the Nordstrom and Forever 21 buildings 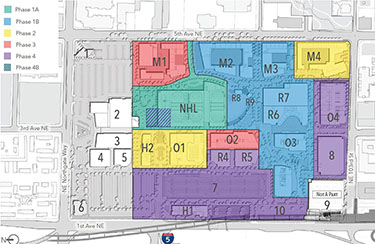 • Two small retail pavilions and a dog park have been added

Remaining about the same are:

• Four mixed-use residential buildings on the east side of the site, with 1,164 housing units (down slightly from August)

• The food court, new above-ground garages and some west side retail remain

• Buildings will range in height from five to eight stories (though less for the Ice Centre); no high rises are planned

The team also includes Callison RTKL and KPFF, civil engineer. No financial partner, as Simon has used in other mall redevelopments, has been announced.

The sequence for Phase I would have the Ice Centre built first, followed by a broad swath beginning with JCPenny — which will close next year and not return to the mall — extending east to Fifth Avenue Northeast. That includes the 03 office building, the Lifetime building and two apartment buildings on Fifth.

The demolition path appears to include the Macy's building. Nationally, Macy's has been struggling and closing stores.

The west and south sides of the site would be developed last, with more offices and the hotel located by the light rail station. However, GGLO says that the schedule for the four apartment buildings is subject to change with market conditions.

When The Seattle Times asked a Simon executive earlier this month about JCPenny and other big box retailers at the mall, he declined to confirm that Macy's or Nordstrom would return.

Significantly, when the project was first announced in March, Nordstrom was on the early site plan. Since the Ice Centre was added, GGLO's new plan indicates Nordstrom and Forever 21 will have to leave or relocate.

The entire mall, plus some neighboring parcels, last traded in 1986 for $102 million.

The Seattle Times says that the three big retailers own their individual properties: JCPenny with 2 acres; Nordstrom with 1 acre; and Macy's (Federated Stores) with 11.5 acres.

Nordstrom did not return calls from the DJC by deadline to get information about its plans.