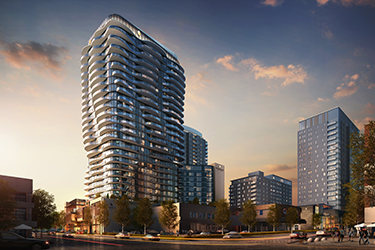 Formerly called The Elan, Avenue Bellevue is the large hotel-condo-retail-restaurant project proposed for part of the block north of Bellevue Square.

Andy Lakha's Fortress Development has spent about $44 million to assemble some 2.7 acres on the south side of the block, where Weber Thompson has designed two undulating high-rise towers. The address is 10300 N.E. Eighth St., where Cost Plus World Market used to be.

This week Fortress announced that InterContinental Hotels & Resorts will open its first Pacific Northwest location in one of the towers.

Lakha said in a statement, “As a Bellevue resident for more than 20 years, I am deeply committed to the future success of the community — and Avenue Bellevue is the biggest and most important project of my life. We are creating something that will set a new standard for hospitality and residential design in the region.

“Growing up in Pakistan, my entire world view of luxury was shaped by the InterContinental Hotel in Karachi, which at the time was the country's only five-star hotel. I am delighted to be able to introduce this revered luxury brand to the Pacific Northwest for the first time.”

Santa Monica-based hotel design firm HBA (aka Hirsch Bedner Assoc.) has now joined the team. Locally, HBA worked on the Pan Pacific Hotel, and it's designing the Sound Hotel/Tapestry by Hilton that will be in Arrive — the 43-story former Potala Tower now nearing completion at 2116 Fourth Ave. in Belltown.

Avenue Bellevue hasn't received any permits yet, and is still going through design review. It will tentatively have two towers at or below 300 feet in height. There will be 251 rooms and numerous amenities in the hotel.

About 332 condos are planned, 106 of which will be larger “estate homes” whose residents will have access to InterContinental amenities.

The project website indicates that the hotel and estate homes will occupy the east tower, with the other 226 condos in the west tower. A Fortress representative previously told the DJC that the east tower would have condos above hotel rooms.

Underground parking for 900 to 950 vehicles is planned. Lakha told Puget Sound Business Journal that elevators will bring delivery trucks to the loading docks below grade.

Roughly 85,000 square feet of retail, entertainment and restaurant space is programmed. Lakha says an unnamed new restaurant will have a three-star Michelin chef to be announced later.

Renderings make it appear that the two towers will be linked by a pedestrian skybridge over the new midblock connector — itself called Avenue Bellevue.

Lakha hopes to start presales early next year, followed by groundbreaking sometime in 2019.

The marketing site is liveatavenue.com. Residential sales will be handled by local firm Erik Mehr & Assoc. and Rennie of Vancouver, B.C.

No general contractor has been announced. CollinsWoerman is the architect of record.

InterContinental has 200 locations now, with another 63 planned. It's one of many brands in IHG (InterContinental Group), which also counts Holiday Inn, Staybridge Suites, Even Hotels and Crowne Plaza in its portfolio.

IHG has its roots in 1946 as the hotel brand of Pan American World Airways. The publicly traded company now has a market capitalization of about $10.4 billion. It has over 5,000 hotels and over 825,000 rooms globally.

Most IHG properties are owned and managed by others. That means IHG won't likely be a financial partner in Avenue Bellevue.

Public records indicate that Lakha has borrowed most of his money to date from Goldman Sachs.