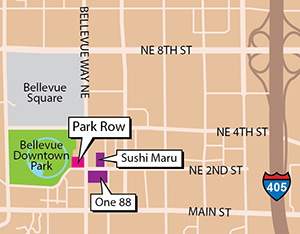 An LLC related to Bosa Development has paid $36 million for the 1-acre Park Row shopping center, at 139 104th Ave. N.E. in downtown Bellevue.

King County recorded the sale on Wednesday. Brokers were not announced. The deal was worth about $767 per square foot for the land. Public records indicate a loan from US Bank to Bosa.

No new plans have been filed yet for the property. It has DT-MU zoning, which allows residential construction between 200 and 300 feet, depending on lot coverage, tower separation and other factors.

The seller was Park Row LLC, associated with the Radford family, which had owned the property for decades.

Bosa also has two other sites on the east side of Bellevue Way:

• The 21-story One88 condominium, on the corner at 188 Bellevue Way, is slated for completion next year. Its 143 units are at least 90 percent pre-sold, according to a Bosa update last August. Bosa paid $22.8 million for that site, previously home to a McDonald's, in 2015.

• Bosa paid $11 million last year for the Sushi Maru site at 205 105th Ave. N.E. It's directly north of One88, and a block east of Bellevue Way. A 21-story tower with 77 condo units is planned. The architect is apparently the same as for One88: Amanat Architect of Vancouver, B.C.

The Vancouver, B.C.-based Bosa Development is run by Nat Bosa. Its biggest local project is the planned 58-story 3rd & Cherry condominium tower at 601 Fourth Ave. in downtown Seattle. It passed successfully through design review last year. Final permits have not yet been issued.

Brother Robert Bosa runs the separate Bosa Properties, which is building a 42-story apartment tower at 2014 Fairview Ave. in the Denny Triangle.