By BRIAN MILLER
Journal Staff Reporter
Renderings by Perkins + Will [enlarge]
Housing units would start on the fourth level, and range from studios to two-bedrooms. They could be rentals or condos, depending on market conditions.

[enlarge]
A sailboat’s billowing spinnaker inspired the preferred design, which has a gently twisting shape.

The Canadian firm Arbutus is new to the Seattle market, but it made a splash in South Lake Union last December by paying almost $21 million for a triangular block just south of REI and west of the freeway.

When plans emerged last summer, before the sale, 44 stories were described. The city now says there are 46, which could be a typo. The triangle is zoned for residential construction up to 440 feet, but bonus area may also be on the table.

The unnamed tower would also include about 9,100 square feet of retail/commercial space in a two-story podium.

Perkins + Will suggests that a sailboat's billowing spinnaker inspired the preferred design, which has a gently twisting shape that gives it the appearance of leaning toward the northeast corner of the triangle.

The tower would also be pushed north on the podium, which appears to have a landscaped deck on top.

Housing units would start on the fourth level, and range from studios to two-bedrooms. Arbutus told Puget Sound Business Journal last week that the units could be rentals or condos, depending on future market conditions.

Many if not all units would have terraces. A rooftop amenity area would also have a deck.

Three levels of underground parking with 134 stalls would apparently be accessed from Yale, on the west side of the block. Earlier project notes had indicated more parking (220 stalls) on four levels. No parking is required by the city. 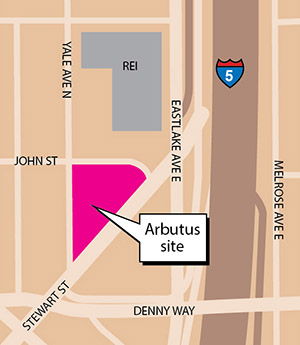 Selling large condominiums projects without parking spaces is still a relatively novel concept in Seattle, but not in Vancouver, B.C., where Arbutus is based. Still, the Seattle market is gradually changing. For instance, the Emerald condo tower at 1613 Second Ave. downtown will have 63 stalls for 266 units.

Pinnacle Plus Development's planned two-tower condo at 1516 Second, with up to 540 units, could have 310 stalls. Spire, on a tight, triangular site at 600 Wall St., will have 315 stalls accessed via car lifts for its 337 condo owners.

Above the podium at 1370 Stewart, Perkins + Will estimates that the tower footprint would average about 10,500 square feet. Project size above grade, excluding the parking, now looks to be around 452,000 square feet.

Arbutus says it hopes to start construction in the fourth quarter of this year, with completion around August of 2022. No general contractor has been announced.