Back in 2012, an LLC associated with local real estate investor Perday bought the vacant former Watermark Credit Union building, at 800 Stewart St., for about $13.4 million.

Perday and related company Accretive Technology Group now have their offices in the five-story 1978 building. The site was upzoned two years ago.

Lincoln Property Co. West told the DJC on Tuesday that it’s developing the site on behalf of the owner, Perday. LPC West and architect Weber Thompson have filed a preliminary plan to put a 54-story mixed-use tower on the 13,555-square-foot corner. The Denny Triangle site is now zoned for construction up to 550 feet.

The project will enter design review this year, and the developer hopes to start construction in about 18 months. That would likely take two years, with completion in 2022 or 2023. A future sale of the project or completed building would be for the owner to decide, not LPC West.

This will be LPC West’s first downtown high rise. It’s currently developing the phased, four-building, 664-unit Parkside at Esterra Park in Redmond. It was also part of the team that converted most of the downtown Macy’s to 300 Pine, which is leased to Amazon.

(Editor’s note: The story has been updated to show that Lincoln Property Co. West is developing the project for Perday.)

Weber Thompson describes a mostly residential tower with about 477 units on the top 43 floors. Below that would be four levels of offices (totaling about 53,352 square feet), four levels of structured parking and probably some amount of ground-floor retail. A roof deck is also planned, with two mechanical levels above.

The project is listed with a nominal value of $150 million. The site is certainly valuable, located near Amazon buildings in the Denny Triangle and the Washington State Convention Center expansion now underway. 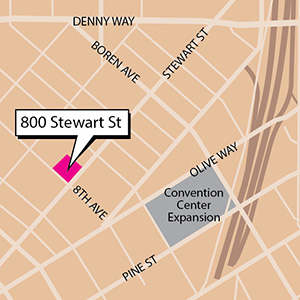 Perday is led by Shawn Boday, who's also a founder of Accretive. That 22-year-old web development company says it has over 300 employees, with related businesses including ICF Technology, which does video streaming. Other related companies have included Accretive Networks, Flying Crocodile and Streamates.

The Perday name is a mash-up of Boday's name and that of Ross Perkins, his partner at Accretive.

Perday says it owns mid-rise office buildings in Seattle and apartment buildings with over 2,200 units in Seattle, Cheney, Spokane and the Idaho panhandle. It does not appear to have any track record as a developer.

Perday may be hoping to take the tower through the permit process, then sell, but efforts to reach Boday before deadline were unsuccessful. The building, with no exterior signage, isn't publicly listed for sale.

Must of the rest of the block was previously developed by Schnitzer West, with its two office towers at 1918 Eighth and 818 Stewart. Schnitzer West sold them in 2011 to JP Morgan Chase for about $480 million. A year later, it sold the corner to the Perday LLC.