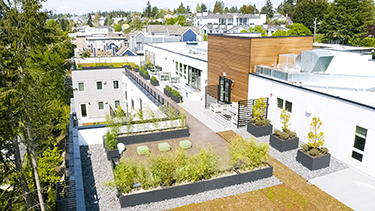 Photos by Will Good/J2G Creative [enlarge]
A rooftop deck has views of the neighborhood and the Olympic Mountains. 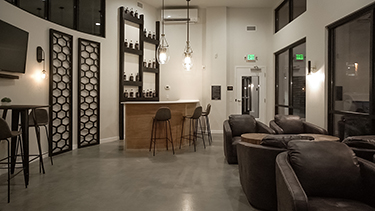 [enlarge]
Residents of Bogtown Flats can unwind in its bourbon lounge.

The 85-unit project originally was named Woodland. It consists of six floors of apartments over two levels of concrete parking garage with 56 stalls, 23 of them with a storage space. Apartments range from about 600 to 1,100 square feet and consist of open one-bedroom, two-bedroom and two-bedroom loft configurations. Included are six live/work lofts. Some units have views of the Olympic Mountains.

Rents range from $1,655 to $2,600 a month — except for 20% of the units that fall under the city's multifamily property tax exemption program. To be eligible for reduced rent, household income must be below 75% area median income for one-bedroom units and 85% for two-bedroom units.

Encore Architects is the designer.

The building is named after the neighborhood's boggy beginnings, according to Edison47, the property's manager. The DJC reported in 2002 that some buildings and roads in the neighborhood were sinking because they were built without pilings on peat bogs.

A Rush spokeswoman wrote in an email that the building has a 3-foot-thick mat slab foundation and is founded on firm, undisturbed glacial outwash soils well upland of any peat areas.