Lusty Lady hotel plan has a permit, but no general contractor 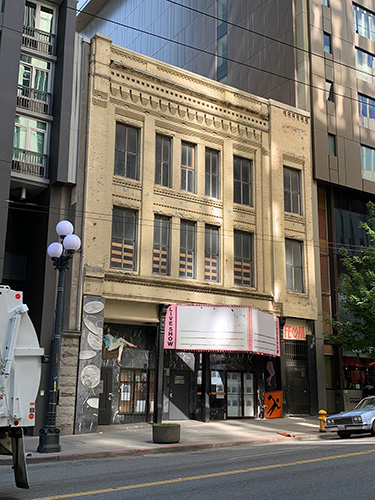 When the DJC last visited the Seven Seas building, aka the Lusty Lady building, at 1315 First Ave., the proposed boutique hotel plan was nearing its construction permit. Revolve Development, which has a 99-year ground lease agreement with the building's longtime owner, the Tolias family, told the DJC in December 2016 that it hoped to start construction the following year.

A construction permit was finally issued in December 2017. But nothing has happened since then, and the 129-year-old building remains vacant. (A short-term pop-up gallery and exhibition space briefly occupied the ground floor, but has since departed.) The approved renovation plan is for a 43-room hotel, with roof deck, First Avenue restaurant and a basement bar at the Post Alley level.

The permit is due to expire on June 1, and Revolve has filed for a renewal. The reasons will seem painfully familiar to any Seattle developer.

First, Revolve wrote to the city this month, “In June 2018, Venture (General Contracting) informed Revolve that it was unable to proceed at that time due to Venture's lack of staff.”

Translation: The general contractor, like so many others, is too busy with other jobs. There just aren't enough contractors and employees to go around.

Then, says Revolve in the same renewal letter to the city, “Andersen indicated that they would be able to assist after they completed an adaptive reuse project in Tacoma, the (McMenamins) Elks Temple Hotel. However in March 2019, after the completion of that project, Andersen informed Revolve that they would not be able to serve as general contract due to their internal staffing issues.”

The developer says it's looking for another contractor. But in the meantime, “Revolve exerts no control over the economic growth fueling Seattle's real estate development market and the unprecedented demand for contractors. There are a limited number of general contractors with the skill, knowledge and availability to undertake such a complex adaptive-reuse project.”

Hence the need for a permit renewal. DCI Engineers is the structural engineer.

The Lusty Lady closed shop in 2010. The building, which was sliced in half in 1966 to make way for the Heliparker Garage (now the Four Seasons), was previously home to the Hotel Vendome and Sultan Hotel.