The longtime home of Bush, Roed & Hitchings, at 2009 Minor Ave. E. in Eastlake, went on the market last year, priced at $8 million. Ellen Mohl of Westlake Associates is representing the property owner. The 22,600-square-foot site, also bounded by Fairview Avenue East to its west, is a stone's throw to Lake Union. The 1962 offices were designed by Paul Hayden Kirk, originally as a psychiatrist's office.

Now a new 21-unit townhouse plan has been filed by developer Michael Pollard, on behalf of an unknown buyer. The site has split LR2-LR3 zoning, which could mean lower heights closer to the lake (west) and taller facing Minor.

The property hasn't yet sold, and BRH hasn't announced any plan to move. Westlake says its lease ends in June 2021, with an 18-month mutual termination agreement.

BRH didn't respond the the DJC's request for comment. Kirk's non-landmarked old building would be removed.

Next door to the south, at 2001 Minor, is the original office building for Kirk's firm, completed in 1961. It occupies a smaller parcel on the corner of East Newton Street, and isn't part of the Pollard townhouse plan. It last traded in 2005 for $1.5 million. No plans have been filed there, though there's a second, separate development planned on the same block.

Developer Peter Erickson of The Urban Fund and Portland-based Surround Architecture are planning 37 units at the non-contiguous addresses of 2021 and 2033 Minor, land he already owns. The two separate three- to five-story residential buildings — stepped in height — will have 17 units each. 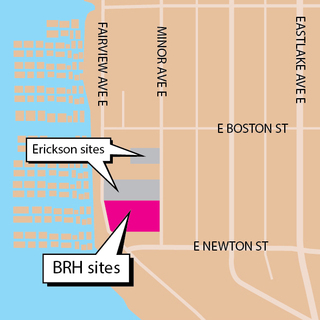 Peter Erickson is planning a separate 37-unit development north of the BRH site.

Erickson recently told the DJC that the development is an update on Lake Union Lofts, an unbuilt townhouse project that was stalled by the recession. Whether the units end up as condos or rentals, he said, “That's undecided.” But they'll be built to condo grade. “I actually live in the neighborhood, so it's important that it's attractive.”

Erickson's 2021 Minor site is directly north of the BRH site, which he said was under contract — but didn't know the buyer.

A trained architect, Erickson previously developed houseboats other townhouses in that area of Eastlake. He's also known for renovation projects including Belltown Lofts, the Mutual Life Building in Pioneer Square and the Bertschi School (a former church on Capitol Hill). Some of those projects were with architects like Olson/Walker, Arellano/Christofides, Driscoll Architects and U-Arc Design.

Both the Erickson and Pollard plans benefit from the recent citywide upzone.

(Editor's note: The story has been corrected to say that Ellen Mohl of Westlake Associates is representing the property owner.)