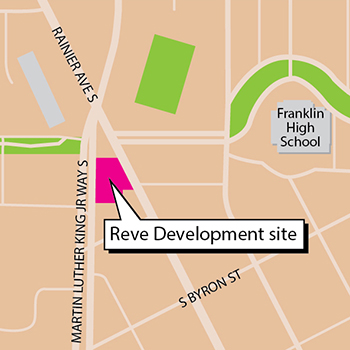 Just a few steps south from Mount Baker Station, two separately owned properties make up a roughly triangular potential building site at 3111 Rainier Ave. S. They're now occupied by a convenience store and, to the north, the vacant former home to a cell phone and check cashing store.

Reve Development and Encore Architects recently filed a redevelopment plan for the site. The proposed eight-story apartment building would have an unspecified number of units and 47 underground parking stalls. No parking is required, but a garage entrance is indicated on Rainier.

Bike stalls and some amount of ground-floor commercial space are also likely.

It's an oddly shaped site, with the corkscrewing pedestrian overpass crossing above city land immediately to its north. It's bounded by Martin Luther King Jr. Way South on its west side. The laundromat on the east side (Rainier) is separately owned, and not part of the plan. To the south is Mercy Housing's eight-story, 95-unit affordable housing complex now being constructed on the former National Pride Car Wash site.

If combined, the trapezoidal site would total 19,400 square feet. The south parcel traded last year for $1.7 million to a Renton LLC. The north parcel has been owned for decades by Broadway Associates, a local investor group with several members on Mercer Island.

Reve — “dream” in French — is a relatively new firm based on Mercer Island. Its principals are architect and general contractor Suzanne Zahr and attorneys and developers Michael Ross and Robert Spitzer. The latter duo is part of the team behind the 301-unit Stazione:25, now nearing completion one block north of the light rail station at 2615 25th Ave. S., by the QFC.

The seven- and eight-story Stazione:25 employed both a HUD loan of $76 million and EB-5 funds raised by partner Steve Smith and Christopher Chen. The Renton-based LLC that owns the south parcel at 3111 Rainier is governed by Chen.

The project, listed with a nominal value of $18 million, hasn't yet entered design review.