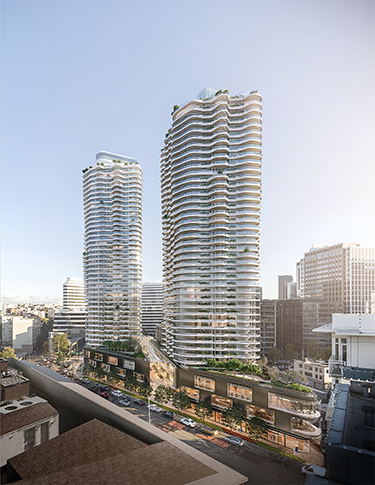 Rendering by Henriquez Partners Architects [enlarge]
The podium will have about 148,700 square feet of retail and commercial space on three levels. Trader Joe’s will occupy about 15,000 square feet.

Westbank Corp.'s two-tower, 48-story residential project is under construction at 1200 Stewart St. in the Denny Triangle. It's expected to open, with 1,014 units, in early 2022.

Now we know where residents will be shopping for groceries. Westbank just filed a plan for a new Trader Joe's, which would be the boutique grocery chain's sixth Seattle location.

Architect Kevin Cooley of Vancouver, Washington, filed the early plan, which puts the store on the corner of Stewart and Minor Avenue — the south tip of the triangle bordered by Denny Way on its north side. Cooley has designed other stores for the grocer, which now lists about 488 locations nationally. The company is based in greater Los Angeles. It didn't immediately respond to a DJC request for comment.

Above are the east and west residential towers with undulating facades and balconies.

Total project size for 1200 Stewart is around 1.4 million square feet. Graham Construction is the general contractor, and Henriquez Partners Architects of Vancouver, B.C., is the architect. Graham says it broke ground in May 2018, and hopes to complete 1200 Stewart by December 2021.

Westbank's project, financed in part by $297 million from pension funds secured by local firm DSC Capital, has changed its program somewhat since its master use permit was issued in 2017. It later added four floors, with a $10 million mandatory housing affordability fee. It also lost one level of parking; there are now five levels below grade, one of which is a truck-loading area.

The parking is now listed at 613 stalls. Commercial parking will apparently be segregated from the residential. The Trader Joe's plan indicates 130 stalls and 66 bike stalls; but that may be shared with other commercial tenants.

The apartments are now listed at 1,014 units — down from the prior figure of 1,051. Those numbers could again change by the time the building is completed.

Graham's website seems to be the best source of information for the project, which isn't listed on Westbank's website. Nor does Westbank feature the two towers under construction at 707 Terry Ave., near the Frye Art Museum, which are also being built by Graham. The latter firm is also building the First Light condominium tower — prominent on Westbank's website — in Belltown. That project switched from rentals to condos before it broke ground.