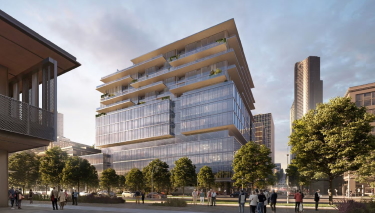 Renderings by Perkins and Will [enlarge]
The building would have a mix of offices, retail, 106 residential units and underground parking. The architect is Perkins and Will. 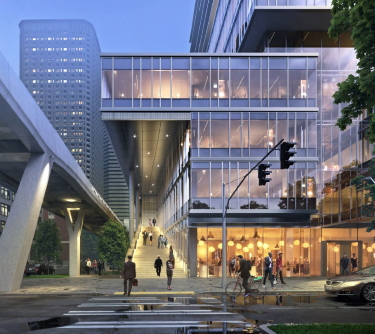 [enlarge]
A public stairway and elevator is planned for the north side of the new building.

The 14-story building would face the downtown waterfront and ferry terminal.

The developer has dropped an earlier alternative for a 260-foot-tall office/residential tower.

The taller plan, well above the 170-foot zoning, would've come from an agreement to help fund about half the cost of the city's future replacement of the Marion Street Bridge. (That's the elevated pedestrian walkway from First Avenue to the Colman Dock, now rerouted on a temporary bridge.)

However, Marion Street Bridge is not neglected or forgotten. In its current incarnation, now a dead end at the Forge Lounge overlooking Alaskan Way, the bridge is partly supported by Selig's Commuter Building, which will be demolished.

The replacement bridge, with a budget of around $20 million, will be self-supporting. But Selig's new building will connect with it — as do the Colman and Commuter buildings now.

Selig will also incorporate a public stairway and elevator on the north (Marion Street) side of the new building at its second-floor level. The stairs will descend to Alaskan via an open landscaped notch in the building's northwest corner.

The offices will occupy floors two through eight, with a 5,800-square-foot terrace on the fifth floor, overlooking Marion and the pedestrian bridge. The apartments will go on floors nine through 14. Many units will have terraces or balconies. The separate office and residential lobbies, with separate elevators, will both be on Alaskan.

The penthouse level — for residents, not office tenants — could also be called a 15th floor. It'll have west-facing decks totaling around 4,300 square feet, a lounge, fitness center and events space. The enclosed area is about 6,700 square feet, including mechanical rooms.

Ground-floor retail, some of it now labeled as a food hall, will total about 16,700 square feet. The three underground parking levels will be accessed from Western Avenue.

Total project size, including the parking, is about 519,000 square feet. The building will be 190 feet tall at the roofline of its 14th floor. Selig will gain the extra height and floor area via a mandatory housing affordability payment of about $2.8 million.

Last year Selig paid $44 million to the Jacobi family to acquire the block. John Jacobi founded Windermere Real Estate, and for a while the new Selig plan was known as the Windermere Building, though that name seems to have disappeared. Likewise, Jim Olson was previously said to be collaborating with Perkins and Will on the design, but his name is nowhere on the latest proposal.

The project will be the tallest new structure on the waterfront, and the first to benefit from the 2017 downtown upzone.