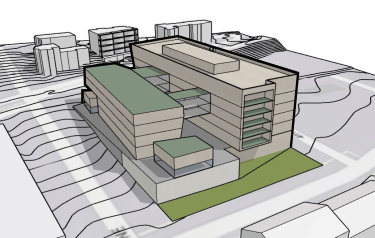 Rendering by Weber Thompson [enlarge]
The development would have a lumber warehouse and a mix of offices, restaurant and retail space.

Dunn Lumber is planning what it calls Latona Station: a new six-story mixed-use building with offices, a lumber warehouse, retail and restaurant space, plus up to 160 parking stalls.

The century-old, family-run business owns two blocks in Wallingford. The west block is where its main store and lumberyard are located. It's the east block, at 3800 Latona Ave. N.E., that's bound for redevelopment.

Dunn, now in its fifth generation, was founded in Wisconsin in 1907. It's been at its present location since 1931.

The company has gradually been assembling the two blocks and, as the DJC first reported earlier this year, paid about $5.9 million over several years to complete the 1.5-acre east block. It's now zoned for construction up to 65 feet.

Weber Thompson's preferred design is dubbed “mortise and tenon,” in a nod to the lumberyard's heritage. It would mass the building into a taller east side and lower west side, connected by walkways. All the old buildings would be removed, including the Gas Works Gallery building.

Three levels of parking would be mostly underground on the sloping site, with the garage entry on the east side of the block, where Fourth Avenue Northeast is a dead end. There would also be about 125 bike stalls.

Latona Station is described as a headquarters expansion, meaning most of the office space will likely be up for lease. The project would be a notable office link — connected by the Burke-Gilman Trail — between the University of Washington and Fremont, which is fast becoming a tech hub in its own right.