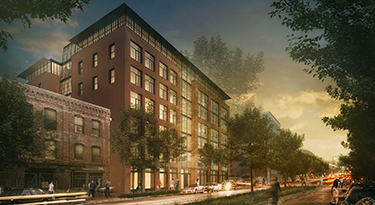 Rendering by Olson Kundig/Urban Visions [enlarge]
Architect Tom Kundig says The Jack intends to be “careful and ‘quiet’ to its surroundings.”

After an appeal to the city hearing examiner was abruptly dismissed last October, Urban Visions' planned office building at 74 S. Jackson St. has all its necessary permits in place, and will break ground on Thursday. Construction fencing already surrounds the site.