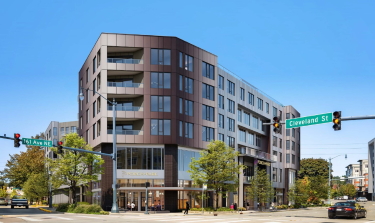 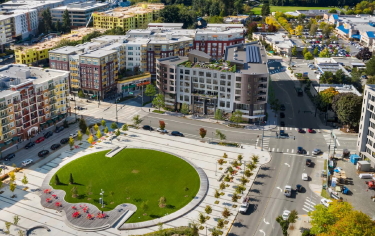 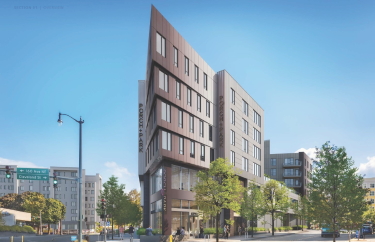 [enlarge]
The building’s 8,600 square feet of ground-floor restaurant and retail space includes a small bay on the corner.

For well over a year, MainStreet Property Group and architect GGLO have been planning to redevelop a triangular block at 16001 Redmond Way.

Porch + Park, as it's called, will have a virtual design review with the city of Redmond today.

The six-story plan has changed in two significant ways. First, the apartments have dropped from 107 to 88 units. (Two are described as guest suites.)

And on the formerly residential second floor will instead be 19,800 square feet of offices. That's an interesting new departure from MainStreet's usual formula of apartments over retail/commercial space. The Kirkland-based developer is also planning even more office space in another mixed-use proposal near Marymoor Park, called Spark.

The office entry for Porch + Park will be on the block's northeast corner. Residents will enter on the southeast corner.

Porch + Park draws its name from its location opposite the city's new downtown park, east across 161st Avenue Northeast. Essentially, its front porch overlooks the park — as will a planned roof deck. (There will also be a third-floor terrace on the building's south side.)

The ground-floor retail and restaurant space, totaling more than 8,600 square feet, would have two large bays also facing the park. One smaller bay would go on the building's sharp west corner.

MainStreet is also joining the trend toward stacked parking. For residents and office workers, 55 stalls will be stacked; another 38 stalls will be for all users. Bike rooms would have at least 88 stalls — probably more.

GGLO estimates the total project size, including the parking, at 135,243 square feet.

The property, which MainStreet doesn't yet own, is a short walk to Downtown Redmond Station, where light-rail service will begin in 2024.

The triangle has two owners: the city and a local family. Tyler Jones and Royce Cottle of Leibsohn & Co. are the sellers' brokers. Current tenants Subway and Six-Day Mattress Store are on month-to-month leases.