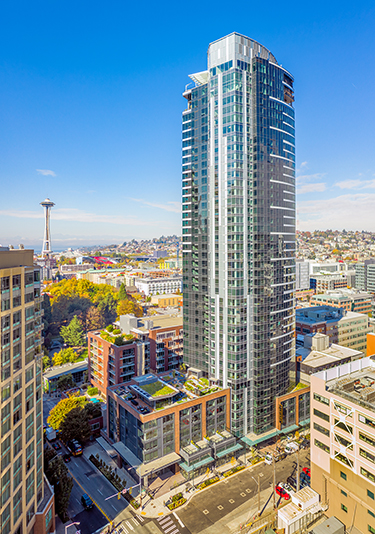 Image by Holland Partner Group [enlarge]
The 461-unit Kiara opened in late 2018, and went on the block last year.

The buyer was Kiara Owner (DE) LLC, which is associated with Oxford Properties Group of Toronto. Public records indicate a loan from Prudential Insurance Co.

Eastdil Secured represented Holland and its frequent partner NASH, aka North America Sekisui House. They acquired the corner site, on Denny Way, in 2015 for $20.1 million from the local Brooke family. The former warehouse property was once home to Ducky’s Office Furniture.

The deal was worth about $901 per rentable square foot. That includes the 15,247 square feet of retail, now leased to District H (part of the H Mart chain).

The 461-unit Kiara opened in late 2018, and went on the block last year. Underground parking has about 374 stalls. Weber Thompson designed the tower, and Holland served as general contractor. It also has about 188 bike stalls.

Oxford invests on behalf of the Ontario Municipal Employees Retirement System pension plan, or OMERS. Kiara appears to be its first local investment — and, possibly, its first on the West Coast. It claims over 100 million square feet in its international portfolio, in all classes of real estate. In the U.S., it lists office investments in Washington, D.C., Boston and New York, where it’s a partner with Related Cos. on the massive mixed-use Hudson Yards project.

Oxford seems to be expanding south. In February it acquired a 25-story, 147-unit tower in Atlanta, Lilli Midtown, for over $72 million.

Holland and NASH last year sold the Chroma and Perry apartments, in SLU and on First Hill respectively, for a combined $209 million. (Eastdil was again the broker.) Also last year, the same duo paid $33 million in December for an entitled BelRed apartment site; and $22 million for a high-rise site in the Denny Triangle.

For the sellers, Kiara’s sale is only exceeded by the $324 million disposition of Westlake Steps in 2017.

Near Kiara in the Denny Triangle, Holland and Weber Thompson have two big apartment buildings underway on the same block. The 2019 Boren Ave. N. tower will have 44 stories and 410 units; it’s now under construction. Next will be 1000 Virginia St., with 45 stories and about 435 units.

The Kiara team also included Cary Kopczynski & Co., structural engineer; and Susan Marinello, interiors. It was built to meet LEED Silver certification. The project began life as 970 Denny. Weber Thompson calls it a 40-story building; the top floor is all amenities and decks, and there’s another deck overlooking Denny from atop the five-story podium.