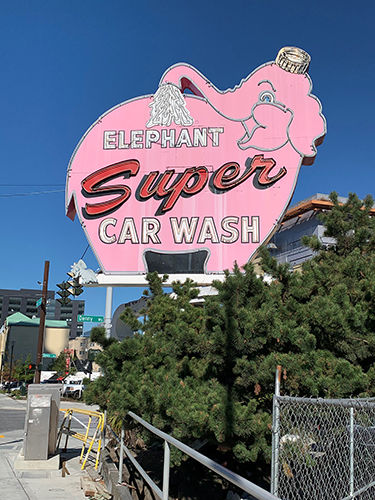 Photo by Brian Miller [enlarge]
There are no landmark protections for the famous pachyderm overlooking Denny.

Another beloved Seattle icon appears bound for the wrecking ball and redevelopment. Longtime landowner Clise Properties has filed an early plan with the city to demolish the Elephant Car Wash, at 616 Battery St. in the Denny Triangle.

Clise has owned the triangle, immediately south of Denny Way, for decades. The property isn't publicly listed for sale, though securing a demolition permit is often a precondition for prospective buyers. No new building plans have been filed for the property, which totals 18,965 square feet. It's zoned up to 240 feet, and is also bounded by Seventh Avenue and the new Borealis Avenue (formerly Aurora).

The demo plan also includes the triangular parking lot Clise owns at 601 Wall St., west of Borealis. That triangle has 13,003 square feet, with the same zoning. It's now being used for construction staging.

No contractor is attached to the plan. Bush Roed & Hitchings prepared the land survey for Clise.

The downtown Elephant location has been closed for several months, owing to the pandemic. It's now fenced, covered with graffiti, and surrounded with trash and tent encampments.

The famous rotating neon sign at Denny isn't landmarked or protected, though it could presumably be moved, like the Seattle Post-Intelligencer's neon globe. The original sign and building date to 1956. (There's also a smaller, newer replica sign on the south corner of the property.)

The Elephant business dates to 1951; it was founded by the Anderson family, and has since 1982 been owned by the Haney family. It now lists 15 locations around Puget Sound. The business owns the sign, not Clise. It was designed by Bea Haverfield of Campbell Neon.

The DJC was unable to reach the Auburn-based Elephant Car Wash for comment. Clise didn't respond to a DJC query.

Among its extensive holdings in the Denny Triangle, Clise has gradually redeveloped or sold properties, with Amazon and Onni Group being prominent past buyers. Downtown, Clise has also put the Securities Building block on the market, with NKF as its broker. Who's brokering the two triangles is unknown.

Given their odd shapes, a residential developer would seem more likely than an office developer. Just to the west, at 600 Wall St., the 41-story Spire condominium tower recently topped out on a triangle that totals only 10,700 square feet.