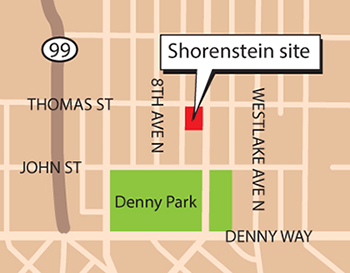 The deal appears to be the largest land sale in South Lake Union this year.

After filing a new office plan in October, Shorenstein Properties has now paid $17 million for the property at 235 Ninth Ave. N. in South Lake Union, according to King County records.

The seller was Ninth Avenue Partners LLC, which assembled three old warehouse parcels during 2017 and 2018 for $11.5 million. That group, based in Kirkland, never filed any detailed development plans for the corner, at Thomas Street.

The deal was worth about $944 per square foot. The buyer of record was 9North Owner LLC. Tom Pehl of CBRE represented the seller.

(Editor's note: This story has been updated to include the names of the brokers representing the seller.)

Weber Thompson is designing the project, which will have eight stories — with a height of 95 feet. Though city zoning says the limit for a commercial buildings is 85 feet, which the architect suggests is out of date, the project will regardless pursue the city's Living Building Pilot Program — which grants extra floor area in exchange for various green features. Built Green or LEED certification may also be pursued.

The 9North project — perhaps only a working name — hasn't yet entered design review. It's now listed at 123,800 square feet of offices over underground parking with 78 stalls. Some amount of ground-floor retail is also likely. The early plan carries a nominal value of $30 million, which doesn't include the land cost.

Shorenstein, of San Francisco, is also a partner with Wright Runstad in the Spring District, in Bellevue.