North Coast Electric's SoDo HQ is on the block 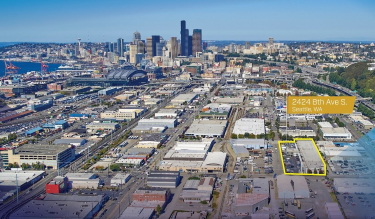 North Coast Electric moved its headquarters in 2005 to a then freshly renovated warehouse at 2424 Eighth Ave. S. Last year, the Lemman family sold the company after two generations of ownership to Sonepar USA. Now the nearly 2.5-acre SoDo property is for sale.

The building totals 89,612 square feet, according to the brokers; it was developed in 1970. It's been owned since 1977 by the Lemman family — separate from the business.

The county assesses the long, low building, which extends between South Stacy and South Lander streets, at about $15.7 million.

Sonepar has been steadily acquiring U.S. electrical parts distributors; and it now has a reach in all 50 states. The North Coast deal gave it 34 locations in our state, Oregon, Idaho, Alaska and Arizona.

Sonepar is an international business, with its headquarters in France. It's also family owned, and terms were never announced for the North Coast acquisition.

Whatever North Coast's future relocation plans may be, the SoDo site could be bound for redevelopment by a logistics company. As the brokers note in their listing, “The property is situated in a last-mile location within South Seattle, one of the nation's most desirable and heavily sought-after markets.”

Kidder Mathews recently put the region's industrial vacancy rate at 5.2% percent. For the close-in market, SoDo included, the vacancy rate drops to 4.1%. Noting the surge in online shopping owing to the pandemic, KM's Randy Gilliam wrote, “There still appears to be demand for large logistics users. Amazon continues to be active, with nearly 7 million square feet either leased or committed, and possibly still looking for additional space.”

Also looking back at the third quarter, Neil Walter Co. recently said in its market report that “vacancy in the Seattle close-in market remained below 3.5% compared to Greater Seattle's 5.2% and the national average of 4.7%.” (The two firms probably draw their close-in market maps a little differently; hence the varying vacancy rates.)

North Coast was founded in Pioneer Square in 1913, then later moved its headquarters to Portland. Bob Lemman bought the business in 1974, and moved its offices to Bellevue in 1983. Son Peter Lemman was CEO until the Sonepar sale.