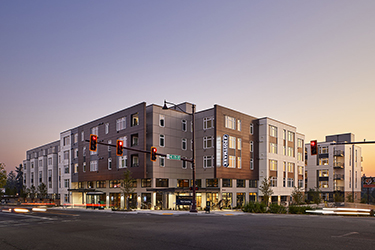 Photos by Aaron Locke [enlarge]
The Postmark sits on a former post office site in Shoreline. 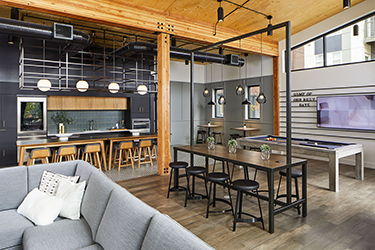 [enlarge]
Mass timber was used throughout the project, including the freestanding courtyard clubhouse between the two residential buildings.

A Katerra news release says the project is one of the first developments in the country to use cross-laminated timber for floor and ceiling assemblies. Katerra used 3D modeling and virtual design and construction to create the building prototype, which called for making components in a factory. It also came up with fire-resistant solutions to maintain the building's structural integrity, such as using Hilti fire protection products to seal penetrations and joints between floors and walls.

“We didn't want to just come up with a solution that was going to work for one project, this is changing the industry at a nationwide level, when this body of testing and evidence could come into place for nationwide approval on projects,” said Hans-Erik Blomgren, director of testing and certification for structural products at Katerra, in a YouTube video.

The project consists of two five-story buildings above a two level below-grade parking structure. Permit applications submitted in 2017 to the city indicated 267 parking stalls in the garage.

Postmark's website lists studio, one-, two- and three-bedroom apartments for lease at monthly rates from $1,480 for studios to $3,005 for two-bedroom units. Rates for a three-bedroom layout of 1,203 square feet were not listed. Available studios range from 455 to 490 square feet, single bedrooms are 562-720 square feet, and two bedrooms are 840-1,050 square feet. Units have exposed wood ceilings and beams, thanks to the mass timber construction.

Katerra built the project on schedule and was the architect of record. It also provided construction management, interior design and engineering services. VIA Architecture was the design architect and Coughlin Porter Lundeen was the structural engineer. The Wolff Co. was the developer. (Editor’s note: The project team has been updated.)